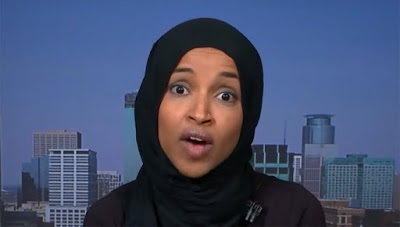 Devout Mohammedan Congress person Ilhan Omar, a member of “the squad” has been officially accused of appropriating Alabama’s culture by marrying her brother.
She countered that while it’s true that she did marry her brother,  Ahmed Nur Said Elmi, it was only a marriage of convenience and that his heart always belonged to his goat, Jasmine. While many can understand a preference to a she-goat over Ilhan Omar, the matter of culturally appropriating an Alabama custom remains and may be an issue in her coming bid for re-election this November.
If ‘taco Tuesday’ (which happens to be today) is cultural appropriation of Mexico, how much more serious is the Omar matter?

USN Blues
The US Navy has had a lot of black eyes recently, and they’ve all been self-inflicted. After a number of critical blunders, USS Gerald Ford, CVN-78, is now expected to deploy in 2024, rather than 2020, and the cost over-runs are being absorbed by the funding earmarked for USS John F. Kennedy CVN 79, USS Enterprise CVN 80 and USS Doris Miller CVN 81. As of this writing, I am not convinced that CVN 81 will ever be built.

The Littoral Combat Ship (LCS, which also stands for Little Crappy Ship) program is a complete abortion but we keep building them, only to scrap them once they’re complete.

The DDG 1000 series won’t ever be front line ships despite the billions spent.

And the Navy (in its wisdom) has slowed construction of the Arleigh Burke DDG 51 series of destroyers.

The FFG(X) and CG(X) are as far in the distant future as the new Navy bomber to replace the Intruder, now long out of service.

Disastrous collisions at sea have revealed serious problems with the navy.

Admirals working hard (overtime) trying to cashier SEALs, contrary to the explicit directions of the Commander-in-Chief have not made points.

The current budget proposed by President Trump reduces the money earmarked for the US Navy and the admirals are wounded.  But the truth is that the Navy isn’t doing a very good job. Sealift capability is marginal at best. The Navy needs to search its soul and perhaps reduce the number of admirals by half as a show of good faith.

As a retired naval officer, I don’t like to write this sort of thing, but it’s true.