Trying to Make Sense of Germany 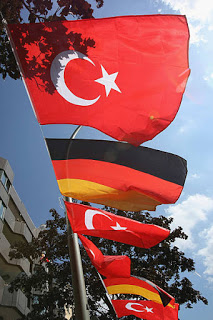 Facebook
Twitter
Pinterest
WhatsApp
It’s not your daddy’s reich anymore.
When visiting Germany I continue to be amazed to see more Turkish flags flying than German flags. In some areas of Germany the ethnic Turks far out number the Germans. And by this I am not addressing the nearly one million unemployed military age Muslim males from Syria that Germany welcomed into its borders.

Being part Swiss and part German with family from both places who were part of my growing up, I do get the Germans. And they mystify me at the same time (collectively). Individually, Germans think like who they are, and I like them and enjoy spending time in Germany. Some of the best Turkish food I’ve ever eaten was served in Germany. They invited in a lot of guest workers from Turkey over the years who stayed and joined the culture in a weird way.
Interestingly enough, Russians (modern Russian Federation types) are more conservative when taken as a whole than the Germans are. The Germans are socialists by in large. Some are International Socialists, some are National Socialists, some are another brand of Confused Socialists (my term, not theirs), but they’re leftist/nihlists who aren’t sure about what they want.
Russians don’t tolerate Muslim minorities in Russia these days. They give them the bum’s rush to the border and invite them to return from the fetid desert that they sprang from. Germany has taken the opposite approach and while I don’t understand it, they rolled in the dung of military age Muslim males, still unemployed, and seem to want to keep them.
Germany is our ally sorta – Russia is our enemy sorta. We send troops to defend Germany, we send troops, ostensibly to fight Russia. Don’t look for reason in American foreign policy. Even the Trump Administration refuses to brand the confiscation of land in South Africa based on race to be “racist”.