Trivia: Whose Baseball Card is displayed at CIA HQ? 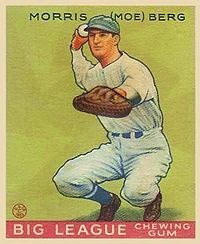 Facebook
Twitter
Pinterest
WhatsApp
When baseball greats Babe Ruth and Lou Gehrig went on tour in baseball-crazy Japan in 1934, some fans wondered why a third-string catcher named Moe Berg was included. Although he played with 5 major league teams from 1923 to 1939, he was a mediocre ball player.
Casey Stengel once said: That is the strangest man ever to play baseball. When all the baseball stars went to Japan, Moe Berg went with them and many people wondered why he went with the team. Moe spoke 15 languages including Japanese.