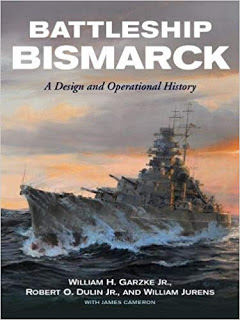 Facebook
Twitter
Pinterest
WhatsApp
I recall seeing a fantastically illustrated Gutenberg Bible and to me it was elegant. The history of the work was epic, the effort that went into the creation of document and its illustration was magnificent.

I felt much the same way when I turned the pages of Battleship Bismarck, A Design and Operational History. And while it is not the Gutenberg Bible, it might well be considered to be the Bismarck Bible, meticulously researched, magnificently printed, and glorious in its illustration and in the vast selection of historical photographs which document possibly the most famous battleship in history.
The wreck of the Bismarck was discovered in June 1989, and the forensic examination which ensued is documented in this work. The Authors served as technical consultants to Dr. Robert Ballard, who led three trips to the last resting place of Bismarck, resting upright at a depth of approximately 15,719 ft about 400 miles west of Brest. As such, this comprehensive study of Bismarck, by its very forensic nature, exceeds the works which went before.
This review could focus on the bones of the Bismarck but that would do a disservice to the comprehensive nature of the work produced by William H. Garzke Jr., Robert O. Dulin Jr., and William Jurens with James Cameron. The team of authors actively sought out the surviving crew of Bismarck and sought their input. The passage of time, the extensive body of research into the history of Bismarck and of the British Warships that lived and died in her pursuit come together in this profoundly organized and researched work.
This book, published by the US Naval Institute Press, is on my coffee table in my living room. There are no books next to it. It stands alone in a place of honor.