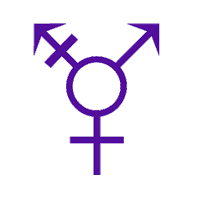 (link) You can’t make this up. Always, a brand of menstrual products, has been forced to scrub the “woman” symbol off their packaging in response to a coordinated effort by transgender activists to punish the brand for “discrimination” against transgender individuals.
I don’t know why these companies continually cave to the freaks and misfits, but they certainly do.
It doesn’t matter how hard they transition, male DNA remains male DNA and female DNA remains female DNA. Smearing lipstick on a guy doesn’t make him a woman.
I realize that the tranny lobby would like to have their own custom DNA, but it’s a ‘pipe dream’. They can bugger themselves to death if they want to, and I don’t care if they do. But it won’t change biology and changing the packaging of female menstrual products won’t do anything to make them feel better about themselves.
Antidote

I have to counter the insanity of humans with the total cuteness of fawns hanging out at the White Wolf Mine. This little white tail fawn is about a month old. 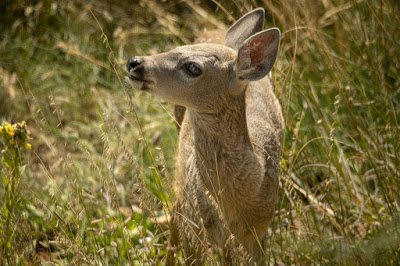 Adventures in Kurdistan
I’ve been listening to a throng of people in the pay of the Military Industrial Complex whining about Syria and the Syrian Kurds. Let me frame it this way. They feel that it’s okay for American troops to occupy forcibly and over their objection, the territory of a sovereign nation with whom we are NOT at war.
They are advocating not just American Imperialism, but Imperialism by presidential fiat! We allied with the Syrian Kurds to win back predominately Kurdish cities in Syria. We did not ally with them to fight the Turks in their continuing fight to wrestle territory away from Turkey, our NATO ally, (and Syria) to creat a Greater Kurdistan. The Kurds understood that.
Their position endangers not only the lives of US servicemen in Syria, but the 3-5,000 American servicemen in Incirlik and Zamir, Turkey, who would logically and easily come under attack with we went to war with Turkey. They would have American forces deployed in Syria in penny-packets and sandwiched between the Turkish Army, Turkish militias (who are barely controlled by Ankara), Kurdish militias, Assad’s Syrian forces, and Iranian Shiite militiamen (who hate Americans). What could possibly go wrong?
They have yet to define a critical American national interest that justifies putting Americans in harm’s way on the ground in Syria. It is that type of thinking that has gotten us into numerous unending wars in Southwest Asia at the cost of thousands of American lives and done nothing but destabilize the region and get ten of thousands of inhabitants killed.
They have not addressed the problem of Turkey seizing the American nuclear arsenal at Incirlik and becoming a de facto nuclear power and the issues that would raise in the Middle East. No one wants to discuss that possibility.

Fredd said – I was wondering what happened to the Epstein thing. Of course the lead investigator died (of natural causes at age 50), because when you start poking into stuff like that (Vince Foster), the malfeasants of the matter will call in some chits, and you are gone.

We have been a banana republic for quite some time, now.

I’m tired of ‘civilization’. It’s way over rated, Fredd. The Clinton Dead Pool may soon include Rep. Tulsi Gabbard (D-HI). It may go down as a suicide since Hillary denounced her as a Russian spy.

I think that it’s only the Clintons who can take out an insurance policy with the corrupt FBI. It wouldn’t be seemly for Gabbard to do so.

raven – Thanks for the Mexico info- it is hard for a normal guy working a normal job to really get a sense of the utter jungleness of it all. Mao was right. Power comes from the barrel of a gun. And that is why they want to take them away.

Firearms and ammunition in the hands of trained people is our only hedge against tyranny. Even if they are never used in that way, there remains the potential. And it keeps the communists and traitors up at night.

Fredd weighs in again – Mao was right about a lot of things, and unfortunately Mao was not exactly a glass half full thinker. Quite the opposite. And now we have Mao’s evil twin Xi calling the shots in China. Literally.

Mousey Tongue died but left a legacy of despots.

Jules – Tail-lights? Cos you might miss the backend of a great big horse… I bet you’ll see those twinkles on the wrong kinda tails sometime soon.

Police horses clop through traffic and I guess that drunks hit them from time to time. It would be nice if the elk up here at the White Wolf Mine wore lighting at night.

He lived a full life. Two score and ten. That’s actually a long life for a Clinton/Epstein associated person.

Uh huh…[All we hear from the MSM is: “Nothing to see here folks, move along…go back to watching the Kardashian’s and yelling “IMPEACH TRUMP” at your screen.]
Another one added to the Clinton hit list…that’s somewhere around 54 (that we know of). Reminds me the scene in the movie Dave:
Bob Alexander: I’m going to kill him.
Alan Reed: You can’t kill a President.
Bob Alexander: He’s not a President. He’s an ordinary person. I can kill an ordinary person.
Alan Reed: Bob.
Bob Alexander: I can kill a hundred ordinary people.
Anyone with two operating brain cells sees the smoke/fire scenario operating yet NOTHING happens. Forget to pay your parking tickets and the SWAT team shows up at 3:00AM. But for murder…ahh…not so much. Enough to drive an “ordinary person” nuts. [As I comment from an undisclosed semi off-the-grid location in case I type in the wrong trigger keyword.]

If you’re elite, you can kill whoever you want to. If you’re not, jaywalking can get you killed if Hillary or a Kennedy is on the highway and nothing will happen.

Fredd and Camperfixer obsess on the movie DAVE, which was good but not nearly as good as Wag the Dog.

Camperfixer – Seriously great lines from that one…but they were supposed to be fiction. Now we are hearing things massively worse from the Lefty morons.
Bob Alexander: This is mine, Alan. All mine. I made him, I built him. And no Boy Scout is going to come in here and take it away from me, just because he happens to be Vice President of the United States.
Or this classic (said with total disdain):
Bob Alexander: What do you think you’re doing?
Dave: What? Oh, you mean the press conference. I had a couple of ideas that I wanted to share with the country.
Bob Alexander: Share? Share? You don’t call a press conference. I call a press conference. You’re nothing. Do you understand? You’re nobody.
Dave: I’m not nobody.
Bob Alexander: You’re LINT! You’re a FLEA! You’re a BLIP!
Dave: Well… maybe I am. But you’re fired.
Seems Trump does this regularly (the firing part). Gotta love it!

Conrad Brean: 54, 40 or fight. What does that mean?…Remember the Maine…Tippecanoe and Tyler, too…They’re war slogans Mr. Motss. We remember the slogans, we can’t even remember the fucking wars. Y’know why? Cause its show business. That’s why I’m here. Naked girl, covered in Napalm. Five marines Raising the Flag, Mount Suribachi. V for Victory, Y’remember the picture, fifty years from now, they’ll have forgotten the war. Gulf War? Smart bomb, falling down a chimney. Twenty five hundred missions a day, 100 days, one video of one bomb Mr. Motss. The American people bought that war.

Brean: Let me ask you a simple question: Why do people go to war?

Brean: Okay. Why do people go to war?

Young: To ensure their way of life.

Brean: Would you go to war to do that?

Brean: And if you went to war again, who would it be against? Your ability to fight a two-ocean war against who? Who? Sweden and Togo? That time is passed. It’s over. The war of the future is nuclear terrorism, and it’ll be against a small group of dissidents who, unbeknownst perhaps to their own government, have… blah blah blah. To go to that war, you have to be prepared, you gotta be alert, the public has gotta be alert. Because that is the war of the future, and if you’re not gearing up to fight that war, then eventually the axe will fall, and you’re gonna be out on the street. You can call this a drill, you can call this job security, you can call it anything you like. But I got one for you: You said go to war to preserve your way of life? Well, Chuck, this is your way of life. And if your spy satellites don’t see nothin’, if there ain’t no war, then you can go home and prematurely take up golf, my friend. ‘Cause there ain’t no war but ours.

Woodsterman and RHT447 weigh the merits of lighted horses –

Woodsterman – That’s what happens when you feed your horse too many light bulbs.

RHT447 – So, when they pull back on the reins, do the brake lights come on?