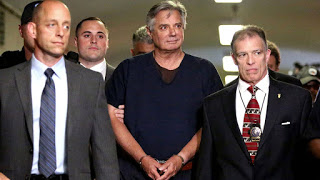 Will President Trump pardon Paul Manafort? At best the pardon is theoretical at this point. Still, it’s something that bothers the Democrats, so they’ve been working to get him convicted on a state charge so that the presidential pardon on federal charges will still keep the former campaign manager locked up. But things aren’t going well for the donkeys.

Manafort, 70, was previously sentenced in a pair of federal cases earlier this year as part of former Special Counsel Robert Mueller’s Russia investigation.

Judge Maxwell Wiley ruled that state law precludes prosecution because the criminal case was too similar to that which landed Manafort in federal prison, writing that the factual overlap between the state and federal cases “is extensive — if not total.”

I don’t claim that Manafort is either “pure” or “blameless”, but if you’re going to lock up Manafort, put him in a cell next to former Vice President Joe (Slow Joe) Biden for 18 U.S.C. § 208, which prohibits Government employees from participating personally and substantially in official matters where they have a financial interest. Then Biden can sit in his cell and wait until a Democrat is elected president and can pardon HIM. Or until he dies. Whichever comes first.
Moses 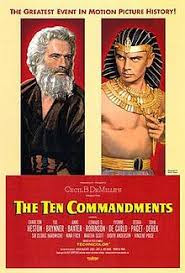 When I lived in the UK, circa mid-1970’s, my land lady asked, “Where was Moses when the lights went out?” answer: “Under the bed, looking for a shilling.” You see, in those days you had a meter and fed it if you wanted electric power in Great Britain. The same was true for the gas. A tuppence went into the gas meter that heated the water in the sink so that you could wash dishes.
Now you know what I know (for sure?) about Moses…he used to look under the bed for a shilling.
But there are theories.
While Moses (played by Charleton Heston) and his Pharaoh opponent (played by Yule Brenner) may be who comes to mind, Egyptian hieroglyphics do not reflect that a person known as “Moses” was ever a prince of Egypt.
In the Egyptian language, the name “Moses” or “Messe” as it would be in Egyptian, simply means “born of”. In modern day terms you might even equate it to the “X” that Malcolm X used to denote the fact that because of his heritage as a slave that he had no idea what his true last name should be.
Atheists often use this as a throw down that the Bible is false. And while I have to agree that many Bible stories are not historically supported by evidence in the way that they are presented, we often need to delve deeper to try and get to the core of who, what, when, where, why and how. We’ve discussed the Exodus of Moses (third exodus) before and that it was almost certainly comprised primarily of Levites.
Archaeologist Rolf Krauss theorized decades ago that Moses was actually one and the same with the short tenured Egyptian Pharaoh, Amenmesse. It’s a detective story, and this guess (it can only be a guess) you’ll never find a glyph that reads, “Moses was here”. Not by that name.
Amenmesse lived during the Early Bronze Age period between 1228 and 1188 B.C. when the Exodus that is described in the Bible most likely occurred (the third slave revolt and a component of the migratory events).
There are plenty of hieroglyphics describing Amenmesse, although serious attempts were made to remove those references because Amenmesse was considered a traitor. Amenmesse’s name means “born of Amun”. Take away the reference to Amun, which you would expect someone to do if they discovered they were not really Egyptian and subsequently led a revolt against the powers that be, and you have the name “Messe” or “Moses”. In fact the story told by Josephus from the Egyptian historian Manetho regarding “The Revolt of Osarseph” is very likely a retelling of the revolt that Amenmesse led in Egypt against his half brother Seti II.
There is a tomb of Amenmesse in Egypt and three sarcophagus/mummies were found there, but none of them turned out to be Amenmesse.
If Amenmesse was the real Moses and the Exodus actually happened as the Bible explains, what would we expect to see afterwards in Egypt to explain why they may not have wanted to record anything about it?
Shortly after 1208 B.C., when the Exodus occurred there was a total solar eclipse over Egypt, likely related to the “plague of darkness”, marking the time. Egypt was ruled by a very young, crippled King named Siptah (also known as Ramesses). He soon died and was replaced by the widow of Seti II, Twosret, but she did not last long either. And then Egypt experienced a period of chaos where there was no King at all and they were subject to invasion by enemies outside their borders. The whole country nearly fell apart until Setnakhte, the father of Ramesses III, emerged to drive the invaders out and restore order to Egypt.
For a young and weak King like Siptah to have decided to memorialize such an ignominious defeat, by a traitor to the kingdom no less, allowing people considered second class citizens to leave Egypt, and that in the course of these events a significant portion of their armed forces had been wiped out, would have been tantamount to posting a sign saying “INVADE ME!” In fact, that DID happen after Siptah and Twosret died but neither wanted to extend what would have been an open invitation to their enemies by advertising their weakness.
If you examine events in that light, there is compelling circumstantial evidence of the existence of Moses and that the Exodus occurred. You simply need to plug what facts there are into the historical timeline, and it emerges. Or not? There are professional clergy who follow this blog and a number of Biblical experts who can take me to task. No doubt they will. My feelings won’t be hurt.
So maybe Moses wasn’t under the bed, looking for a shilling.