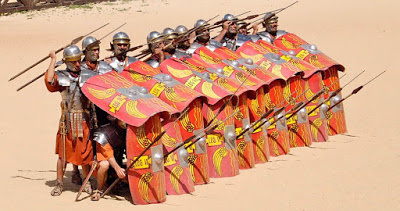 part one
part two
part three
a fictional short series
Gold fever strikes the camp when Quintus and his men return with fifty-four Phoenician gold coins, minted hundreds of years earlier in Carthage. Ursinius is circumspect in regard a campaign to hunt the dark men with more vigor, and to plunder their camp. Scouting the area confirms that the best place for a settlement was where the ruins now exist of a prior colony, but he is unwilling to uproot the fort simply because of the effort involved in that relocation.
Seleucus tries to extract information from the captive that they took in the skirmish. His efforts are unsuccessful. 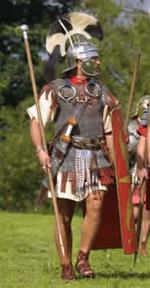 They called him Nero (meaning “black”) and after Seleucus castrated him, they gave him work with the other castrati, laboring in the wheat field on the slope outside the walls of the fortress. The run-off of the spring had been diverted to irrigate a field of wheat and a field of barley that took form after the brush had been cleared.
Nero tried to run away, but the most he could manage was a painful hobble. Two burly legionnaires intercepted him while he was still in sight of the watch tower that stood over the ramparts. Now in addition to a weeping wound under his manhood that they’d plastered with pitch for a dressing, he wore a large, heavy wooden collar and thoughts of escape were put on hold. He understood Phoenician, but could not speak the language as Seleucus put questions to him. He tried to tell them that they wore leather pouches with gold coins in them for luck, because the traders who visited in generations before he was born had done so. The coins, with images of gods and men on their face were said to be good luck, though how much luck they’d been to him was something that he came to terms with as he sweated in the field with the large wooden collar around his neck.

Ursius and Quintus stood on the ramparts of the fort, looking over the fields now under cultivation.

“I love the smell of the countryside, free of cities and of the smells that accompany them,” Ursinius said, leaning out and looking down. “But we are fast coming to the capacity of this land to support us in our present location.” 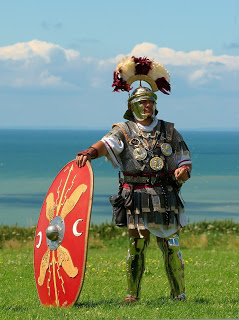 “I think so, Quintus. We need support if we are to settle and farm this land. That support can only come with young men with dreams of their own land, and young women who can bear children who will grow up to expand themselves to other land. We can take slaves like Nero, but it is not our solution. We were promised more and younger people if we became pioneers. Naturally, nobody knows our fate and it should be you who goes and shares what you have seen here with your young eyes and your family connections to the political class.”

“Whenever you are ready. Take the two new boats and the sailors. They feel sour on the land anyway. The two captains can lead them. Go back and share our fate.”

They made their offerings to Neptune and Mars early in the morning and the omens were propitious. Quintus and two boats with four seamen and the captains of the Fidelis and Sea Monster, respectively, cut through the surf and set their lateen sails early on a cloudless day with a freshening off-shore breeze.

The Thirteenth Colony will be continued