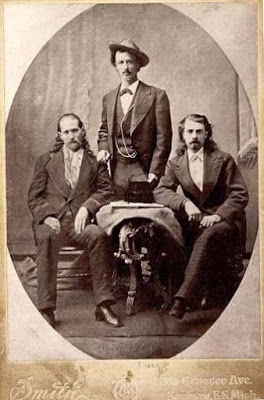 Facebook
Twitter
Pinterest
WhatsApp
There were two famous gunfighters who carried the moniker “Texas Jack”.
John Wilson Vermillion, also known as “Texas Jack” or later as “Shoot-Your-Eye-Out Vermillion,” was a gunfighter of the Old West known for his participation in the Earp Vendetta Ride and his later association with Soapy Smith.

In the late summer of 1869, Virginian and former Confederate scout John B. Omohundro arrived at Fort Hays, Kansas. He had only recently earned the sobriquet “Texas Jack” driving wild Texas longhorn cattle to the explosive railhead towns in Kansas. Texas Jack Omohundro would serve as a cavalry scout and on occasion as a lawman.
Wild Bill Hickok, Buffalo Bill Cody, the Texas Jacks and others associated in various capacities and came together on occasion in conjunction with various Wild West shows. Hickok didn’t like ‘play acting’ and separated from the shows. Texas Jack Omohundro, on the other hand, began his own acting troupe and toured until his death from pneumonia at age 34 in Leadville, Colorado.
Wild Bill and a small wagon party started for the gold rush in the Black Hills the same week that Custer and his 7th Cavalry met their end at the Little Big Horn. Out on the rolling plains, just south of the new gold fields that lay within the bounds of the Sioux Indian Reservation, a wild looking vaquero encountered Hickok and the wagon party. It was Buffalo Bill dressed in one of his fancy stage outfits, and he delivered the shocking news of Custer’s death to Wild Bill, a former scout for the ill-fated Lieutenant Colonel. This chance meeting was the last between the two long-time friends. Less than five weeks later on August 2, while gambling and drinking on a warm and lazy afternoon, Hickok was shot in the back of the head and killed by Jack McCall in the No. 10 Saloon in Deadwood, in the South Dakota Black Hills. He was holding eights and aces, still considered by many to be a death hand. After the tumultuous summer of 1876, Buffalo Bill returned to the stage for good.
Texas Jack Vermillion moved to Virginia where he became a methodist preacher, that notwithstanding, he killed a man in a gunfight in 1890 and ended up moving to Washington County where he died of a ripe old age.
As colorful as the Old West is, it didn’t last long. Just one generation. Then it was gone. The Army’s practice of killing off the buffalo ended the Indian wars east of the Rockies. Apache risings in Arizona kept the Army in the field a little longer.