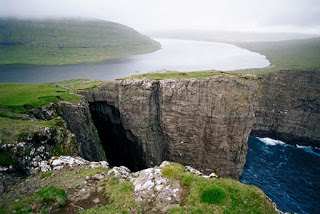 Facebook
Twitter
Pinterest
WhatsApp
Are there really Seal People in the Faroe Islands?
Over the years, strong men from the small village of Mikladalur slowly disappeared. Killed at sea amongst the swirling waves of the North Atlantic, they tragically fell from fog-shrouded cliffs, drowned whilst fishing, or simply found themselves overpowered by the powerful storms that so often batter this region.
Their deaths are no accident. Instead, they are the result of a curse cast by Kópakonan: the notorious ‘seal woman’ of the Faroe Islands.
The story goes that after years of being held captive on land, Kópakonan escaped and returned to sea, reunited with her husband and children. Years later, when the villagers murdered her family, she returned to land – angry and distraught. Here, in front of the village, she declared that the men of Mikladalur would meet unexpected, watery deaths, until so many had died that they could link hands around the shores of the island of Kalsoy.
With a thunderous clap, she vanished without a trace.
Today, all that stands in her place is a statue: the bereft Kópakonan, clutching her seal clothing. Windswept and alone, she is a reminder to the men of the village of the dangers of the ocean and the mythical magic of the Faroe Islands.
There is something wild and wonderful that happens when you go to distant lands if you are able to take the time and explore. Exploration requires patience that takes time to develop in some people. It’s best to mute the cell phone and to walk, look, listen and try to connect with the place – and occasionally with the ghosts of the place. 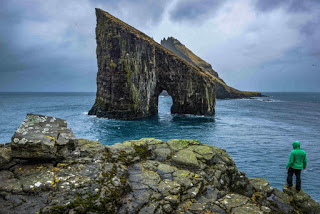 There are lots of Ghosts in the Faroe Islands: Vikings, ice giants, witches, Scottish sailors, Irish monks and even a few remnants of the Cold War.
The islands, located between Scotland and Iceland have strategic value when tracking Russian ships and submarines that are headed West from Murmansk and the Kola Peninsula.
The water is cold but the hospitality of the place is warm and inviting.