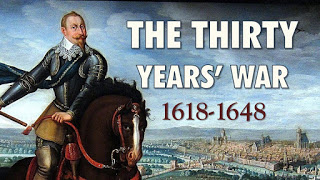 Facebook
Twitter
Pinterest
WhatsApp
OSCAR-MIKE-GOLF, there is a lot of chatter around among the historically inclined about how the Syrian Civil War is remarkably like the Thirty Years War. I have been asked by bloggers to throw my cracker in the soup twice, so I will.

The Thirty Years’ War was fought in Central Europe between 1618 and 1648. It was a deadly religious war that resulted in eight million deaths in a time when being a casualty of war and dying in war was essentially the same thing. (No medivac/casevac)

It began as war between Protestants and Catholics and then expanded as many of the great powers of the day entered the conflict. Some nations grew in influence because of the war and others were devastated. I invite you to read more about the gritty details if you’re interested.

As with all significant civil wars (the War of Northern Aggression in the US 1860-65 comes to mind),  emotions scar the societies involved that reverberate to this day. The only winners of the Thirty Years War were England who stayed out, France who waited til the end to get in and Sweden who temporarily became a great power due to its  intervention.

P. S. Flushed with success, the Swedes then went to war with Russia and were handed their hats. Then they became a less than great power once again.

In the Syrian Civil War, Syria’s enemies, Israel and the US (the little and big satan, respectively) are winning because they’re staying out of the fighting.  The US is present in the area because it showed up to defeat ISIS under President Trump’s leadership, but that doesn’t extend to the Civil War in any significant extent.

The US clearly projects power by its presence East of the Euphrates and we’ve read on several blogs how the Russians and their proxies wanted to take the Americans down to Chinatown (kick their butts to Pizza Hut) and it turned out very badly for them. The problem that the Russians and their friends have is that they feel if they can beat Arab militias and the Syrian Army, the Americans should be a push-over. (too bad/so sad)

Syria is the biggest looser and Turkey is close behind as the world finds that the might of Turkish armor and combined arms can’t dislodge a thousand or so Kurds. Russia looks like a Potemkin Village since their military is severely taxed by merely keeping it in the field in the face of a logistics train less than 900 sea miles in length over unopposed (sea or air) access. The Russia issue reflects the Spanish in the Thirty Years war. That effort effectively started the slide to the end of the Spanish empire by exhausting what strength they had left. I don’t see that happening to Russia, but it confirms their modern status as a regional power and no more.

Iran would be a big loser but for the Obama nuke deal which gave them the cash to keep going. The great power playing the English role is China. They stuck their nose under the tent, then backed off because the only winners never showed up to the game.

Then there are the Saudis and the fringe players who have tried to keep a chip in the game to thwart Iranian imperialistic fervor — are they Holland?

Bottom line, the intervening 400 years between 1618 and 2018 means that as much as it’s fun to draw general parallels, they don’t work very well in this case, IMHO.