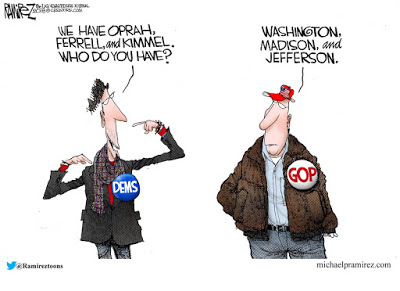 I’ve been asked to cast the chicken bones (repeatedly) and predict the results of tomorrow’s mid-term election (in detail).
Really?
Here’s my take on things: The Republicans will retain their majority in the House of Representatives and they’ll gain seats in the Senate.
If they don’t retain their majority in the House, the House of Reps will vote to impeach President Trump before Christmas for some sort of false charge. And if that happens, the Republicans will gain a majority one day and will immediately vote to impeach Spartacus, Poke-a-haunt-us, Crooked Hillary, that old Communist Bernie, Slow Joe Biden or which ever Democrat is in the White House. That’s just the way it’s going these days.
Voting for Democrats is like giving the children gasoline and matches and hoping for an outcome that is different from the inevitable. The economy will stall, and they’ll blame Trump. A rock will fall from space and they will blame Trump. Hillary will have (more) hemorrhoids and Trump will take credit.