Freedom of Religion – and politics 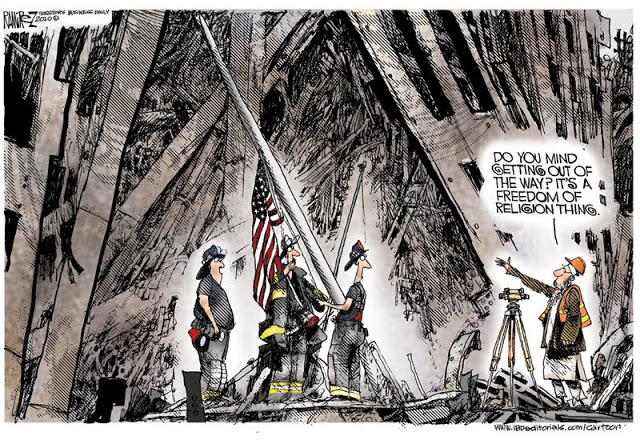 Is Islam a religion or is it a political movement? Can Islam as a political system co-exist with a Republic? These are hotly debated topics under normal circumstances, but in the shadow of the proposed (but not yet built) 9/11 Victory Mosque that Islamic people want to construct, the matter has gone nuclear – a metaphor, not a reference to the nuclear weapons Iran is developing with the express purpose of using on Israel.
As of today, the plans to build the mosque are going forward despite suggestions that the project’s organizers are contemplating moving this mosque elsewhere. There are approximately ninety mosques in New York City and nobody seriously suggests that Americans have abrogated the freedom of Muslims to worship in The City. If they build a mosque somewhere other than the place they picked, 600 meters from the hole in the ground (still), where the World Trade Center once stood, they may find it hard to locate a portion of the city where there isn’t a mosque currently serving those of their faith.
So we come back to Islam, the faith of religious conquest – a faith with considerable political overtones, and issues of American law and the sense of fair play that Americans cherish. Robert Spencer’s best selling book STEALTH JIHAD: How Radical Islam is Subverting America without Guns or Bombs suggests that Islamic charities, the ACLU and even members of the executive branch of government are pawns in a holy war that advances a jihadist/Islamic agenda that is not in the best interests of the United States. The Victory Mosque does seem to fit into that pattern – of political action, cloaked in religion.
See the American Perspective for more on Robert Spencer and Pamela Geller.