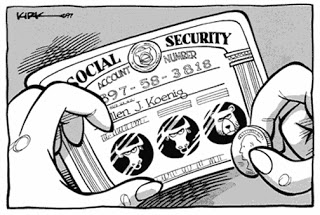 Facebook
Twitter
Pinterest
WhatsApp
I’m continually perplexed by the division in the nation politically. Nobody disagrees that Social Security is bankrupt. (LINK to CNBC – Voice of the Liberal Media) The money that should have been restricted was dumped into the General Fund by President Lyndon Johnson to help pay for the Viet Nam War. The current Democratic majority in Congress and the president assert that it’s not bankrupt and that Republicans (who warn of dire circumstances) want to take Social Security payments from the pockets of pensioners.

No matter WHO wins when, the Social Security monster looms and everybody wants to pass the ball to the next Congress in the hopes that it won’t have to be faced by them, on their watch. This sort of irresponsibility is what we’ve come to expect from politicians. Nothing new here, folks. We can let Social Security splat on the wall at 100 MPH, or we can change the way we do business.
People who are retired need to retain their current benefit structure.
People who haven’t retired need to face harsh realities:
Or you can do what we’re doing now, and twenty years in the future there will be no Social Security benefits paid out to anyone (but the government will still take it from your paycheck the way they do now).