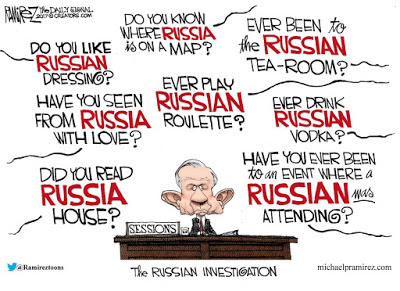 Facebook
Twitter
Pinterest
WhatsApp
The American media (corrupt, elite, smug, rich, progressive, lying and evil) is more concerned about whether AG Sessions had Russian dressing on his salad than they are with what’s going on in the world.

During his annual “Direct Line” call-in session, where every-day Russians can ask questions, President Putin spoke about Russian operations in Syria. Since the corrupt, progressive, elite, smug, nasty, lying mainstream media is focused completely on encouraging people to either assassinate President Trump or have him removed from office for things without substance (smoke and mirrors), they don’t spend much time informing you. Let’s “virtually” listen in on what he said, as carried by Pravda and other Russian language publications.

President Putin said, “Our short-term goal is to enhance the Syrian army’s fighting capacity and retreat to our Hmeimim and Tartus bases, leaving the Syrian troops to effectively achieve their aims. If the need arises to, say, use warplanes, we could support them in their fight against terrorist organizations.”

Putin also said Russia’s military industrial complex had benefited greatly from testing its latest weapons in Syria. “It has done enormous good for our defense industry…. The use of cutting-edge weapons has allowed us to understand how they work under combat conditions and to make required adjustments in the quality of these advanced weapons systems. But we knew for sure they are good weapons.”

Combined with this, the experience acquired by the Russian army in Syria, is “priceless”. 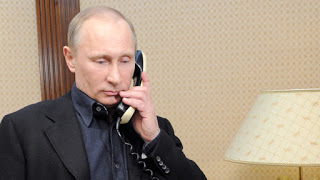 Putin’s candor about the benefits to Russia from the Syrian expedition is refreshing, albeit one-sided. He did not moralize about high minded purposes. Putin is not a universalist or a humanitarian and he is proud of it. On the other hand, Putin has never spoken about Russian casualties or the costs of Russia’s involvement in Syria. Those are matters that have never bothered Russian leadership historically (whether the Romanov Dynasty or the Reds under Stalin) unless entire army groups were being destroyed and Corps were reduced to company size by the Germans at Stalingrad, for example – then they cared.
He and his government have demonstrated a clear vision of their goals in Syria and have not strayed far from them. The Russians have not permitted mission creep and are not engaged in nation-building. Their military presence in Syria narrowly serves Russian national goals.  There is a lesson in this for the USA, if we’re willing to pay attention.
Putin said that Syrian President Assad “is not only ready for dialogue with the opposition, including even with the armed opposition, but is ready to work with them on a new constitution. He added that Assad is even willing to accept that the future possible early presidential elections will be put under strict and tough international control.
Putin’s remarks are the first to disclose these insights about President Assad’s concessions for reaching a settlement. In January, Assad said everything was negotiable, but without specifics. The Russians apparently have been putting pressure on Assad to accept a political formula that will end most of the fighting. Assad will not resign, but he is more flexible than before.
USA Involvement and the Russian Reaction

The Russian Ministry of Defense warned the US about its activity to establish a second base in southeastern Syria. The Russians and the Syrians have called the US presence in southeast Syria an illegal intrusion.
Abu al-Atheer, military spokesman for the US-backed Maghawir al-Thawra (Revolutionary Commando Army) armed opposition group (AOG), said US forces had expanded their footprint near Al Tanf by building a second base at Zakf, about 70 kms/43 miles northeast.
Abu al-Atheer said US special forces were now patrolling up to 100 kms/60 miles from Tanf. He also said more US special forces were arriving at Al Tanf and at Zakf, and more weapons had been delivered.
Muzahem Saloum, another AOG official, said the Zakf location would back up Tanf and was expected to be a “first line of defense” against any attack by Iranian-backed Syrian pro-government militias.
A US military spokesman denied that US soldiers had set up a new base. He did not deny that a new base had been built, presumably by the US-backed Maghawir al-Thawra fighters.
On the 14th, two US sources told the press that the US had introduced two High Mobility Artillery Rocket System (HIMARS) vehicles into Syria at al Tanf from Jordan. The HIMARS has a range of 300 kms. These deployments apparently prompted the Russian warning.
The statement by Muzahem Saloum probably is a cover story. Zakf’s location represents a military advance towards Deir ez-Zor.
The fighters in Maghawir al-Thawra are reputed to have come from Deir ez-Zor, which they hope to liberate. The Syrian government still holds positions in Deir ez-Zor, but it has been besieged by Islamic State fighters for a year.
The US already has attacked pro-Syrian government forces on three occasions for approaching the US base at Al Tanf too closely. Now that the US has expanded its perimeter, the likelihood of additional clashes is high, as part of a struggle to control the lines of communication between Damascus and Baghdad and Damascus and Deir ez-Zor.
The issue of “Kurdistan” is an issue that is negotiable where the Russians are concerned. That’s not true for the Syrians, Turks or Iranians.