The Balkan Chessboard (a case study) 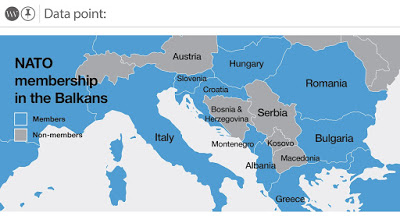 Facebook
Twitter
Pinterest
WhatsApp
There is a battle for energy dominance underway in Southeastern Europe and the Balkan peninsula. The key players are the USA, Russia, Greece and the Greek Orthodox Church. It extends to Ukraine and energy companies there as well.

The battle being waged extends beyond offshore drilling blocks around the Island of Cyprus. The discovery of accessible natural gas on the sea floor in 2010 near Cyprus will clearly help the EU and the Balkans in their efforts to become energy dependent from Russia. Russia, of course, continues to use the EU’s energy needs as a geopolitical lever, in order to craft a privileged relationship of diplomatic tolerance from the EU states. The Russian strategy under Vladimir Putin, caused the nationalization of many private power companies. The privately held power companies and public companies fill the same national energy policy role since Russian foreign policy and energy policy are one in the same. Petrochemical exports account for one of Russia’s only sources of hard currency from abroad.
Russian energy giant, Gazprom (Gazovaya Promyshlennost), leverages its position politically in the EU very effectively. Only a few months have passed since the EU ended its seven-year standoff with Gazprom without imposing a fine their monopolistic practices, as it did to Google and Intel. The threat, even if only implied, gives the Russians a significant bargaining position and they use it.
In 2015, the European Commission charged Gazprom with acting as a monopoly and in 2018, it settled. As part of that settlement, Gazprom was required to enable the flow of the fuel to the Baltic States, whose gas markets remain isolated from the rest of Europe. Those concessions included lower prices to nations within the EU which have disadvantaged infrastructure.
Political alliances in the Balkans have chosen sides based largely on self interest and the Greek Orthodox Church has become involved in the matter more directly of late. In our exploration of the topic, let’s consider the case of Kavala fertilizer.
Countries of Eastern Europe and the Balkans have paid 30 to 40% more than the average European price for gas. The largest fertilizer company in Greece is Hellenic Fertilizers – ELFE. The company is vital to the Greek agricultural economy. The company paid substantially more expensive raw material costs than the rest of Europe, and its management decided to defend itself with a multiannual lawsuit. It brought legal action against DEPA, the Greek Public Gas Corporation, which remains heavily reliant on Gazprom. Hellenic Fertilizers – ELFE operates in and from Kavala, a port in the Balkans that remains a strategic point of interest for both American and Russian interests. It is owned by Greek Cypriot businessman Lavrentis Lavrentiadis, a controversial figure who positions himself at the center of American interests in the Balkans. He’s been arrested, charged with fraud, released, and for forth in a number of scandals. (Do an internet search of that name if you have further interest)
Lavrentiadis has confronted Gazprom by purchasing natural gas outside of the monopoly, and that sparked a controversy with DEPA. The two other big players in the Balkan energy market, Dimitrios Copelouzos and Evangelos Mytilineos, oligarchs who could buy and sell their competition many times over, have aligned themselves with Russia and Gazprom. It’s difficult to blame them. Russia is closer than the USA and its monopoly on natural gas in the Balkans make it a more likely ally.
The Greek Orthodox Church entered the political flaps that follow Russian gas policy. In Ukraine, the local Orthodox Church has become the latest battleground over ‘the soul of the nation’ and natural gas. The fight extends to the appointment of a new Archbishop. Both the Russians and the Americans want one who is closer to their own interests. Re-enter Greek businessman Lavrentis Lavrentiadis, a friend of the Americans who maintains a personal relationship with the current head of the Greek Orthodox Church, Archbishop Ieronymos, as he did with his predecessor. On the other side of the field there are great monasteries of Mount Athos and some Metropolises of the Greek Orthodox Church which are sponsored by Russian oligarchs.
I can’t suggest which side will come out on top. It remains to be seen. With Ukraine and its gas production in the news in the US every day, there is greater focus on the granularity of these wars for the hearts and minds of the Balkans.  And it is linked to energy policies of the major powers.