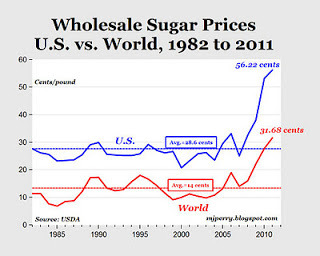 Facebook
Twitter
Pinterest
WhatsApp
How much money are Americans paying to support the sugar industry in America? It’s coming out of our pockets — so how much? And should you care?
Much of the sweetener that is used in the US is high-fructose corn syrup (HFCS), which is is widely perceived as the new trans fat. But it’s cheaper than sugar — in the US — and it doesn’t taste as good as sugar. What’s going on?
The US (and the world) primarily buys ICUMSA** 45 grade sugar. American import quota restrictions  strictly limit the amount of imported sugar coming into the U.S. at the world price in order to protect domestic producers from more efficient foreign sugar growers who can produce cane sugar in Mexico, Brazil, Thailand and Caribbean at half the cost of beet sugar in Minnesota and Michigan.

**The International Commission for Uniform Methods of Sugar Analysis (ICUMSA) is an international standards organization, founded in 1897, that publishes detailed laboratory procedures for analyzing sugar.

The chart (right) displays annual refined sugar prices (cents per pound) using data from the USDA between 1982 and 2011 for: a) the U.S. wholesale refined sugar price at Midwest markets, and b) the world refined sugar price.
Trade protection is expensive to US consumers, who pay twice the world price for sugar on average. Bakery giant, Hostess recently went bankrupt and closed their doors based on a combination of sugar prices and labor troubles. Some of their trademarked products will be back on the shelves in the US, made in Mexico. (Bimbo Foods reportedly bought some of the trademark rights)
American consumers and businesses consumed 22,440,000,000 pounds of sugar last year. Every 1 cent increase in sugar prices costs Americans an additional $224.4 million per year in higher prices.
The U.S. produced 15.76 billion pounds of sugar last year. Due to quotas, Americans were only allowed to purchase 3 metric tons of world sugar, or about 30% of the total sugar consumed. Domestic sugar producers (“Big Sugar”) is allowed based on US Trade Regulations to control 70% of the sugar market every year through protectionist sugar trade policies that strictly limit foreign competition.

If sugar quotas were eliminated, and American consumers and business had been able to purchase 100% of their sugar in 2011 at the world price (average of 31.68 cents per pound) instead of the average U.S. price of 56.22 cents, they would have saved about $3.86 billion. In other words, by forcing Americans to pay 56.22 cents for inefficiently produced domestic sugar instead of 31.68 cents for more efficiently produced world sugar, Americans pay an additional 24.54 cents per pound for the 15.76 billion pounds of American sugar produced annually, which translates to $3.86 billion in higher costs for American consumers and businesses.

US Trade protection ignores the needs of disorganized, dispersed consumers in favor of the concentrated, well-organized interests of the US Sugar lobby that pushes Congress to keep protection in place.
But it’s not only the US Sugar lobbyists who take the blame. The corn lobby is also in on it.

In the United States, HFCS is among the sweeteners that have primarily replaced sucrose (table sugar) in the food industry. Factors for this include governmental production quotas of domestic sugar, subsidies of U.S. corn, and an import tariff on foreign sugar, all of which combine to raise the price of sucrose to levels above those of the rest of the world, making HFCS cheaper for many sweetener applications. (Wikipedia)

High-fructose corn syrup is produced by milling corn to produce corn starch, then processing that starch to yield corn syrup, which is almost entirely glucose, and then adding enzymes that change some of the glucose into fructose. The resulting syrup (after enzyme conversion) contains approximately 42% fructose and is HFCS 42.

If the US stopped the trade tariff on sugar and stopped subsidizing the production of corn, we’d be using low price cane sugar to sweeten foods instead of corn. You can argue that the US is protecting American jobs. However, if the price of food were to drop accordingly, life in the check-out line at the store would be a lot more pleasant.