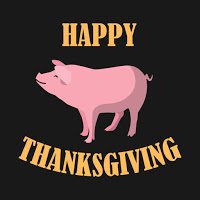 Thankfulness is important. Humility is important. A sumptuous meal followed by football and then a nap is critical to surviving the day intact. Only after the nap do I usually start on desert. Is that selfish of me? Yes, but I’m thankful all the same. In the event that you need an excuse for gorging, bolting down your dinner, 2019 is the year of the pig.  Celebrating early is acceptable. It’s still the Year of the Dog through February of the coming year. After your food coma subsides, you can do it doggy style with the one you love in honor of the year – as if this blog’s readers needed any encouragement. That sort of sagely advice will always be available here, at Virtual Mirage. You’re welcome.
Conspiracy Theory
I was quasi-jumped with some weird conspiracy theory stuff and it made me want to blog about it.
(1) Most of the illegal aliens among us are not from beyond Earth.
(2) Just because you’re paranoid, doesn’t mean that they’re NOT out to get you.
(3) Rule of Thumb – Nobody is that well organized. The US Government can’t keep a secret. The so-called “black sites” where enhanced interrogations took place outside of the US after 9/11 were among the most closely guarded secrets in the nation (right up there with the alien bodies at Area 51 that were frozen and preserved after they landed at Roswell, NM). People couldn’t hold their mud for 4 years. Then it was out. There is no big evil State that can keep its shit wired together long enough to pull off a decent conspiracy. There is no corporate plan to enslave humanity. There are a bunch of conflicting interests making a mess everywhere they go. There are the drunks that hang out at the country club with JEB!, and the drunk witches and warlocks who hang out with Hillary, plotting and planning and it looks like a conspiracy. But Hillary couldn’t get elected even when the fix was in. Barack couldn’t keep control of the legislature after his first two years in office.
So if they’re master conspirators, they’re incompetent. Barack did succeed in selling many millions of firearms and billions of rounds of ammunition into private hands. There are always unintended consequences.