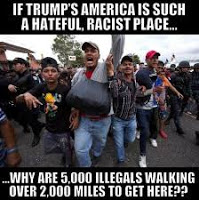 Facebook
Twitter
Pinterest
WhatsApp
The Caravan from Honduras
Living system analysis is useful in many situations. In a living systems analysis, the caravan was a complex living system. Nothing about it looks spontaneous or unorganized. It was well financed and effective as a living system. Its ultimate purpose will not be known until the leaders and backers are identified and questioned. I reached out to friends in the office of the Mexican Secretary of Defence and offered to bring my little group to bear on answering those questions for them, operating ex-officio but with the knowledge and backing of Mexico, on their sovereign territory. I doubt that they’ll go for it, but it’s worth a try.

Let’s talk about the living system for a moment.

The caravan emerged as a living system when it left San Pedro Sula in northern Honduras. There is a history of anti-government unrest and demonstrations in that city.
In January, anti-government demonstrations in San Pedro Sula were disrupted by the earthquake that month in Honduras. The slow pace of reconstruction appears to be the government’s response to entrenched opposition activity and would explain a lack of jobs and prospects.
There is a political undercurrent to the caravan that has not been reported. Honduras seems to have exported political agitators. If so, the Tegucigalpa government would have been pleased to facilitate their departure. Their hand may be in some of the funding as may cartel hands. Keep in mind that about 70% of cartel heroin is grown in Honduras (for export to the US and elsewhere). The cartels don’t want to see political unrest in Honduras ruin their investment or their cash crops.
The fact that the caravan held together through the journey means that all 20 subsystems of a living system received their share of the information, matter and energy required to sustain the life of the system, the caravan. Inputs of information, matter and energy sustain life in all living systems, from amoebas to the United Nations.
The information requirement for a mobile living system is substantial. People need to be counted, identified and monitored. Special needs must be met.
The caravan moved purposefully which means that some people were providing guidance and direction and possessed problem-solving authority and resources. No reporters pursued their identities or their motives, but those are key traits of the information processing subsystem of a living system.
It is vital for the leadership to provide information in a living system about the sources of food and water; public health and hygiene; places to camp and find entertainment; the sources of tents, toilet tissue and soap; how and where to obtain essential items and how to allocate them.
Somebody charted the route for the caravan to take and ensured it followed it.
In terms of matter, a few reporters posted images of the lines of tractor trailer trucks that supported the movement. These apparently contained the supplies, including tents and daily necessities, needed to provide about 2,000 calories per day for each of up to 7,000 people, mostly men.
A key subsystem of a living system is waste extrusion. 7,000 people leave about 3.5 tons of waste every day.
Relative to matter, good walking shoes would be vital for making a long hike, not sneakers or flip-flops, which were common on videos.
The most important unanswered question about matter is by whom and how was this caravan financed. Some videos showed unidentified individuals passing out cash to caravan members at road stops, but the source of the funds was never reported by open source reporters.
Concerning energy, the line of tractor trailers means that access to motor fuels was as essential as food and water. It also suggests that the caravan members relied on motor transport in making the trek.
There has been a lack of responsible reporting on the caravan. One can opine that there may be no responsible reporters left in the media (entirely possible) or on the other hand, the mandarins in the media don’t wish the truth to be told. Maybe it’s both things, taken together? No matter how it turns out, living system analysis requires that elements of that living system be ‘interrogated’ to determine how it is being nourished (paid for).
I doubt that the Democrats are behind the caravan. Its arrival in conjunction with the election and with post election spending that will go to the border wall (before the new Congress is seated) does not aid their occasionally stated aim of facilitating illegal immigration to bolster their numbers in elections. It can be argued that the Democrats may have done better in the mid-term where their tepid performance could be said as a partial victory for President Trump, were it not for the caravan and President Trump’s concerns about illegal immigration coming home to roost.