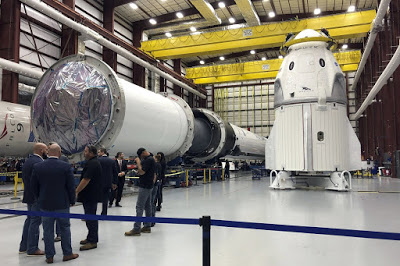 The eight miserable years of ObamaNation ended and we may be back in the game in Space within a month or so.

CAPE CANAVERAL, Fla. (AP) — NASA and SpaceX are now aiming for a March debut of the first capsule from a private company designed to fly astronauts to the International Space Station.

No one will be on board for the crew Dragon’s inaugural test flight to the orbiting outpost.

Officials on Wednesday set March 2 as the latest launch date. If the demo goes well, two NASA astronauts will take a test flight in July aboard the SpaceX capsule.

It would be the first launch of U.S. astronauts into orbit, from U.S. soil, since NASA’s shuttle program ended in 2011.