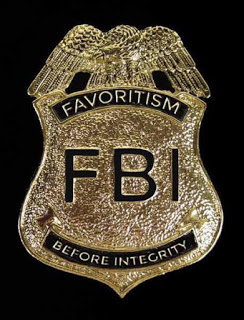 I racked my brain on a subject to post on my blog on the eve of this weirdest of all elections and settled on a tribute to Big Jim Comey. Why not celebrate the man, the myth, the legend here on this blog? The FBI had some bumps and bruises in its history as do all government agencies, but Comey tossed the FBI under a burning bus. He doubled down and in my opinion, he forgot who he works for. (hint: Not Barack or Hillary)
It wasn’t all that difficult to do the right thing – and the right thing is to follow the law. He took an oath to defend the Constitution of the United States against all enemies, both foreign and domestic. Big Jim didn’t do that, did he?

Not from my perspective.

Not at the beginning and not at the end.  And that will be his legacy. Whether or not it is also the legacy of the FBI depends on a lot of things. I leave it to the men and women who wear the badge to make those decisions for themselves. Where much is given, much is expected. 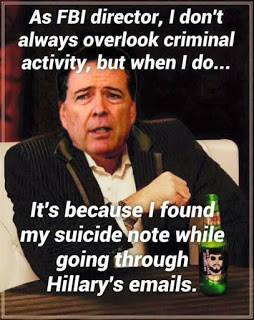 It’s difficult to say whether he did it for a large numbered bank account in Switzerland, whether he did it for the Democrat Party or out of profound confusion. Only Big Jim knows why he sold out. His oath of office was not to Barack or Hillary or their coterie of misfits and freaks. It was to the law and his accountability is ultimately to the people.  The public was not well served by his behavior and by his decision making process.
Nobody believes that the FBI went through 650,000 e-mails on Anthony Weiner’s computer over an eight day period, compared them all to those that they had previously viewed – and declared them all unclassified. I’ve worked around the FBI and they don’t do ANYTHING fast. 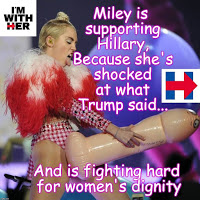 Some progressives – and there are some progressive types in the FBI – say that Comey and the FBI sold out to stop Trump, because he’s vulgar and unfit. (see photo – below/right)

Trump is not surrounded by a mountain of documentary evidence with staff ‘taking the fifth’ and getting immunity deals.

There is OVERWHELMING evidence that  felony crimes were committed and that Hillary Clinton committed those crimes. The FBI’s job is to investigate completely and impartially. That didn’t happen from where I’m standing. If I’m wrong, please explain. The interview of Hillary Clinton on the heels with a secret deal between AG Loretta Lynch and her patron, Bill (Slick Willy) Clinton was a JOKE. Any fifth grader could have asked more probative questions and would have demanded that DOJ authorize a recording of the interview. Big Jim was there in the room to make sure that the interview went down the way his masters/betters demanded it go down.

Is this FBI tradition – Favoritism Before Integrity?

Then there is Big Jim’s right hand man, Deputy Director Andrew McCabe. Campaign finance records show Virginia Gov. McAuliffe’s political-action committee donated $467,500 to the 2015 state Senate campaign of Dr. Jill McCabe, who is married to Andrew McCabe. There was a point in time when that would have been declared a conflict of interest and McCabe would have been removed from any decision regarding the investigation of Hillary Clinton’s criminal conduct. McAuliffe received money from the Clinton Machine and passed it on to Andrew McCabe and his wife.

In the past I recall an FBI Supervising Special Agent who was transferred for disciplinary reasons with a loss of pay grade for asking a subordinate’s breast size at a Christmas party after too much ‘cheer’. His wife (also an FBI Special Agent) was present when he asked.  It wasn’t a ‘solicitation or bullying’, just an off-hand comment while under the grip of the grape. Times have changed. McCabe received $467,500 and was promoted.

Big Jim – you’ve made a lot of people ashamed.