File it under “Holy Crap” 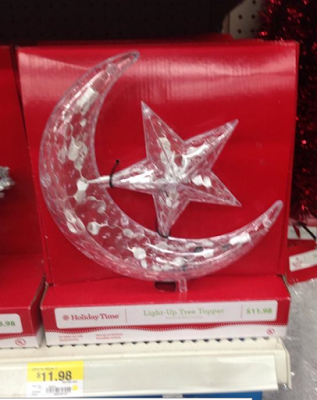 I never screwed with Muslims at Ramadan, but I think that this coming year, I’ll be BBQing baby-back ribs every day during the holy month just to let the neighbors know that my heart is in the right place. For those of you who don’t know, the local rag-heads (pejorative term) built a mosque about 250 meters from my house and then the Mohammedans all moved in as homes went up for sale. There was a tiff between me and some of the local bearded gentry which I won. Now, they cut me a wide margin, and look askance at my tomahawk…but the Baby Backs will be smoking. Maybe I’ll hand out unexpended JHAWG rounds as Ramadan gifts just to let them know that my heart is in the right place.
I’ve seen ornamental tree toppers. There is a big white angel on the top of my tree (which signifies oppression and lack of racial sensitivity to negroes who may decide to burglarize the house when I’m not there). This (above) is the first Islamic tree topper that I’ve seen, for those Muslims who want to celebrate a very Mohammad-like holiday season. 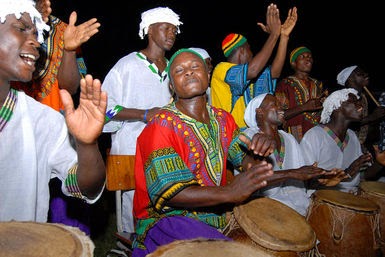 It made me think: What else would Muslims put on their tree to decorate it? Heads of infidels, chopped off in jihad? Really, what would a Muslim use to decorate a Christmas tree — oh, excuse me, an X-Mas tree. Maybe they put Kwanzaa decorations on their trees?
Take a look at the Kwanzaa revelers (right). They have the proper Muslim headgear. And President Obama is a closet Muslim and he celebrates Kwanzaa.
I wonder if Kwanzaa celebrants decorate their trees with stuff they stole from the neighbor’s homes over the past year? How do you mount voodoo crap on a tree? Kwanzaa is sort of a voodoo thing isn’t it?  I’m perplexed.
No matter how you roll, I’m wishing you a delightful Muslim X-Mas and a very Voodoo Kwanzaa Season.
And I need to move out of Southern California so that I can greet people with a hearty Merry Christmas instead of having to guess between Hanukah, Kwanzaa, Christmas, Muslim X-mas, Festivus or just nothing for atheists and agnostics.

…then there are the Wiccan women who just want to dance naked under the moon at the solstice. Don’t get me started.