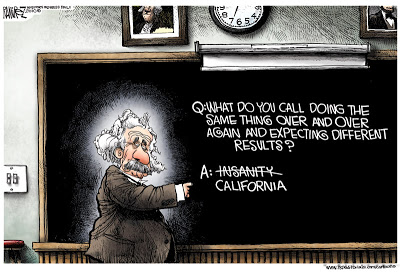 “They livin’it up at the Hotel California …They gathered for the feast. They stab it with their steely knives but they just can’t kill the beast!”

“You can check out any time you want But you can never leave!”
Californians are experiencing record unemployment. CBS reported that unemployment and underemployment in The Golden State is 22%. Unemployment approaches 15% in several large counties. Home foreclosure rates are exceeded only by Nevada.
The solution: Jerry Brown. What did Brown suggest as a solution (no, I’m not making this up)? Electric cars. The state budget gap for 2009-10 was $45.5 billion, or 53% of total state spending — the largest in any state’s history. Does Brown have any suggestion about what will happen in the future as welfare payments to the masses are among the highest in the nation? It seems that he will fall back to the concept of alternative fuels. Is Jerry Brown a drooling idiot?
Meg Whitman was an unpleasant alternative to Governor Moonbeam – but she was better than Brown in any possible universe. Therefore who is worse, Governor Brown or the people that propelled him into another term in office?
California is toxic to business and the flight of jobs out of California will only increase as time goes on as it continues to be a sanctuary state to hoards of illegal aliens, who receive health, welfare and human services at an estimated annual cost of $10.5 billion.
Soon, Governor Brown will mount an official plea to President Obama to reward California with a federal bail-out, as the state goes completely bankrupt. That is unlikely to happen with a House of Representatives in the hands of the GOP.