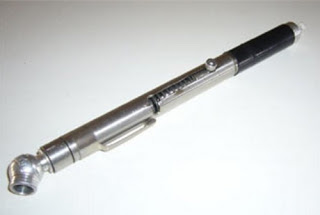 You’ll note that the handgun had been modified to accept a silencer and could also be fitted with a ‘wire’ shoulder stock. USGOV set up enough of them that it also provided a special holster, pictured above. You will also note that the sights had to be modified to see over the silencer tube.
There was a situation where a friend of mine needed to move through an area of total hostile control during the hours of darkness on a moonless night in the Third World. He asked for a Hush Puppy because the biggest threat was dogs and geese which would alert hostiles to his presence. USGOV was horrified and advised that PETA wouldn’t stand for that sort of behavior. Such is the change in attitude.

Before they were surface to air missiles, the stingers in USGOV inventory were used primarily in assassinations. The Stinger pen gun was usually employed at less than arm’s length and usually in a crowd.
The precise nomenclature is .22 caliber, 35mm SLR Pistol
The photo (left) is of one of a few different variants that were produced at different times. Early models were produced by the Office of Strategic Services (before 1947). The later models were produced under contract to the Central Intelligence Agency.

This variant appears as though it might be a tire pressure gauge.
Under the Obama Doctrine, USGOV only uses remotely piloted drones to conduct assassinations. It’s considered much ‘cleaner’. (Though quite frankly, how do you pick up a turd from the clean end, Barack?)

The Heckler & Koch MK 23 is a handgun system that combines a match-grade semi-automatic pistol chambered for .45 ACP a laser aiming module and a suppressor. It was adopted by the US Special Operations Command for operations in the 1990’s. It’s a ’90’s version of the venerable Hush Puppy. It has drawn criticism because it’s a large handgun but it is still in use by US Special Operations Forces.