Weakness of Character = Weakness in Office 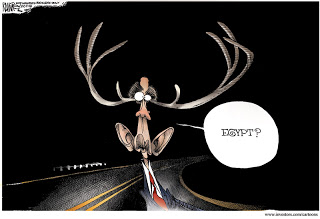 None of us think that Obama is up to the task of leading the country and I’m not sure he was even up to the task of being a community organizer. Everything with the clown is obfuscated from his birth certificates and his college transcripts to his associations with ACORN, subversive organizations, and bigoted misfits like Jeremiah Wright.
Now it’s been revealed that Obama was warned about instability in Egypt. During testimony before the Senate Intelligence Committee last Thursday, Sen. Ron Wyden, D-Ore., asked associate deputy director of the CIA Stephanie O’Sullivan when, and how well, the president had been briefed on the country’s impending unrest. (IBD) 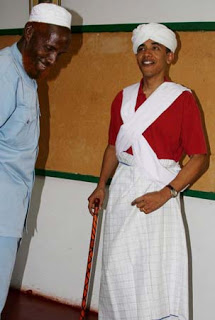 O’Sullivan, who is Obama’s nominee for principal deputy director of national intelligence — the No. 2 post in the massive, multi-agency U.S. intelligence community — told Wyden: “We warned of instability but not exactly where it would come from,” and “we didn’t know what the triggering mechanism would be.” O’Sullivan said that the briefing took place toward the end of 2010.
The problem is not with the CIA or with the intelligence reaching the top. It rests with the (rested and well-vacationed) man who sits in the Oval Office. Obama has shown a regular and disturbing grasp of international affairs and the linkage between events. Egypt rests on the brink and nobody knows whether it will sway toward a more democratic government or toward the Muslim Brotherhood. The Muslim Brotherhood is the single strongest opposition bloc to Mubarak in Egypt. It is a global jihadist organization dedicated to destroying Western civilization.  And Egypt’s fall could set in motion the dominoes of Jordan, Yemen, and even Saudi Arabia.
Obama seems to think that a few verbs from his teleprompter will influence everyone in the Middle East. We know he’s a narcissist but few in history have been as out-of-touch with their hands on so very much information. Or is it something more serious? The American people want to know whose side Barack Obama is on and we’d like to see actions, not just another goofy speech to a hand selected gathering of fawning supporters.