Sky Burial, Friendship and the Season 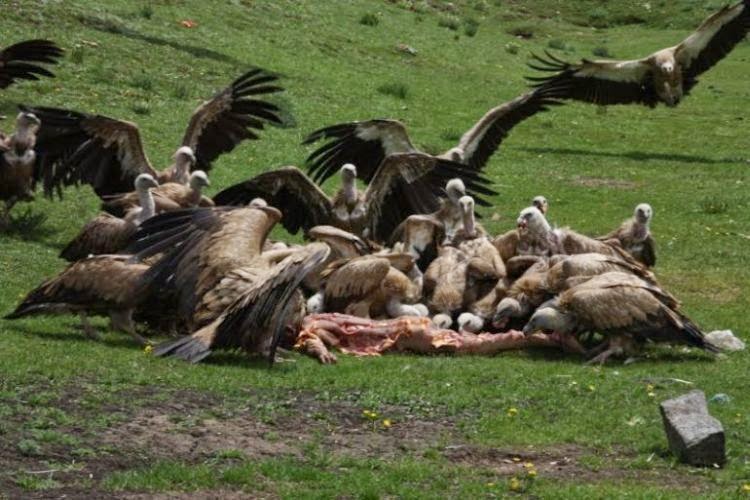 I met Person X when he was being hunted (for real) and he took refuge in the back seat of my BMW. WoFat met him when Person X was an investigator for the United States Senate (I think – feel free to correct the circumstances of your meeting).

Subsequently…oh, for many decades, Person X has been near death from one cause or another.  Person X will outlive both WoFat and me. On that fact, both WoFat and I are in agreement.
“Stevie” (Green Beret) told me that he met Person X when he was stripped naked and tied to a bed frame with springs in El Salvador and he rescued said Person. Though I wasn’t there, WoFat will testify that Stevie is serious as a heart attack.

This was a text from Person X today: Turn off your cell phone and steal my body before the coroner gets there, drag it out to some suitable location, and watch me feed the birds. Use a knife to slice and dice for their convenience. Collect suitable bones for various purposes. Leave the rest where nature will dispose of it, and use branches to erase the tire tracks. Even they catch you, you can plead the Korean Shaman Defense.

Person X wants a Sky Burial. (more on that here)

Person X is married to a woman from the Transylvanian region of Romania (Transylvania). No, you can’t make this up. I suggested that she should make the arrangements since she has the “Igor Defense” based on her nationality.
Thus it goes. You can’t make this up.
My point is that I have a number of eccentric friends. Most of them are spooks, mercenaries, SpecWar operators, generally has-beens like myself, and Person X fits comfortably in that number.
Another friend of mine is flying back from China on Monday and he’s the guy who has the noteworthy reputation of being the only man in history who was unable to get laid in a Tijuana whorehouse. There is a long story attached to that which he acknowledges. Yes, of course he knows Person X. He and I were at Garwoods (Lake Tahoe) last summer with a generally proper woman who said that she didn’t want to hear the story (fearing it was graphic). At the end of the telling, she was laughing.
And so it goes. Another friend is arriving Tuesday from Mexico and an additional friend is arriving from Brazil. The holiday season does that. It brings them together from around the globe – in this case, to sunny Southern California. The holidays are a lode stone.
I think that Mike Watson is in Thailand – maybe next Christmas you and I should go there for a visit, WoFat? Cheng Mai for Christmas? Drop in on Mike and his wife?
Jerry worked in the high mountains on the Brazilian side of the Peruvian Andes in the Huallaga River Valley against the Shining Path Guerrillas (Maoist drug kingpins) until he outlived his usefulness and USGOV betrayed his unit to Sendero. Only he escaped. He called tonight and wants to come by on Christmas to see my girls (who have known him all their lives.
Want to come by my house for Christmas? Really?