Hanging out in Jerome 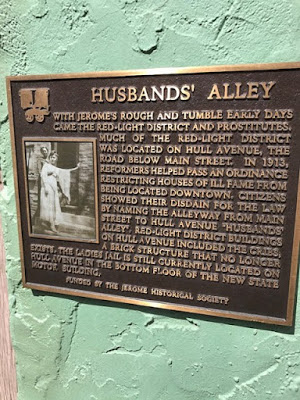 Facebook
Twitter
Pinterest
WhatsApp
Jerome, Arizona was an old mining boom town. Today it’s a tourist trap (a very small version of Virginia City, NV). As with Virginia City, they are still pulling gold out of local mines.
The city is built on the side of a mountain and when you visit, plan on climbing up and down in order to see everything that the place has to offer.
“Tourist trap” notwithstanding, there is a lot of history still present when you walk the narrow streets (with the working mines in background), looking through the clear air all the way to Sedona, about 40 miles away. Because carrying a sidearm is completely legal in AZ, some people carry and its interesting how things come back around.
It’s a two hour drive from the White Wolf Mine, high on the Mogollon Rim, but it’s big country and it was founded by big people who weren’t afraid to travel long distances on foot, on horseback or on a wagon drawn by mules. Today I used a car. And it made me wonder what those 49ers (not the San Francisco football team) would have thought about driving here and there in air conditioned splendor with satellite radio blasting in the background. 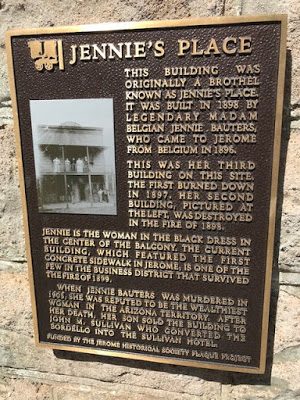 Jennie Bauters was one of the most famous residents of Jerome. In 1898, she arrived at the rough and tumble mining camps in Jerome from Belgium and went to work. A purveyor of love to the lonely miners, Jennie was the wealthiest woman in Arizona on the day that she was murdered.
I think that it was a combination of management skills as well as personal charm that led to her personal fortune and possibly to her ultimate demise.
Cashing in on gullible tourists with more money than common sense is what tourist traps do. In addition to the history, the t-shirts, the over priced food and the souvenirs (that end up as landfill), there are the ghost town tours. Though Jerome was never a ‘ghost town’, the locals still pitch that. There are many ghost towns in Arizona and this blog will take you to some of the coolest in the future. 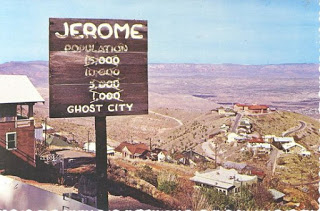 We’ll also haul you along to places like Tombstone, still an operating and living city even though the Earp brothers and Doc Holliday are long gone.