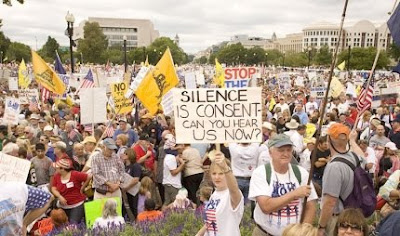 Somewhere between one and two million people marched yesterday. We all know that now. We also know that the state-run media at ABC reported two million people and now they’re saying something like 20,000. I guess somebody got to an ABC executive? The spin is inevitable, the power Dear Leader wields over the media is truly remarkable and more than a bit frightening.

Watch the video below (with a h/t to Hot Air Pundit)
What do you think?
Schieffer:


“I want to go first to David Axelrod this morning. Mister Axelrod, what do you make of this demonstration yesterday on the streets of Washington? Do you– do you think it’s indicative of the nation’s mood. And what message do you have this morning for those people who were on the streets here yesterday?”

“Well, first of all, Bob, I don’t think it’s indicative of the nation’s mood.”

What do you think?
Did the Obama Administration (Dear Leader & gang) get the message? How much louder do we need to be to get their undivided attention?
Silence is Consent!