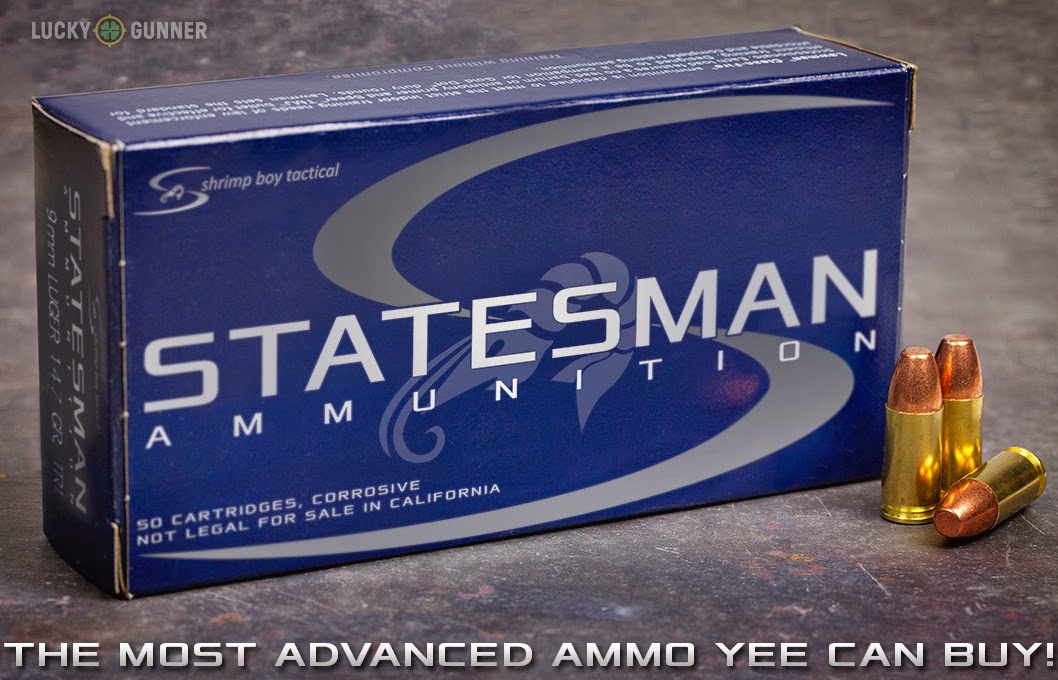 Facebook
Twitter
Pinterest
WhatsApp
I’m sure that it’s no coincidence that Lucky Gunner announced their new Triad Tactical Ammunition today. You will have read about the scandal here on this very blog where you get all the news that matters to you:  “Gun Control and Leland Yee”

Lucky Gunner is proud to announce that we now have in stock a special batch of 9mm Statesman Ammunition™. Originally made as a special production run for a California state official, the ammo will not reach its intended customer due to pending legal proceedings and is now being offered for sale to the public at a deep discount!

Featuring the Triad-Tech™ bullet from Shrimp Boy Tactical for enhanced accuracy, each round is meticulously made to ensure reliable ignition and all rounds are incredibly corrosive. Don’t get caught feeling stung, elect to buy some Statesman 9mm ammo today!

The new Tactical Statesman Ammunition was originally produced for California State Senator Leland Yee by Shrimp Boy Tactical, however since he’s headed for the California penal system (as an inmate, not an overseer), Lucky Gunner is making it available to non-criminals for their self protection.
Billed as ‘the most advanced information that Yee can buy’, the supply is limited, so act now. It’s not like JiHawg ammo where the supply of pork infused paint for the bullet tips is inexhaustible.

Many of us are anxiously waiting to see whether Leland Yee will quietly release the RPG-7 rockets and launchers that he tried to negotiate for delivery to California based criminal gangs. If you think that the Statesman ammunition will blow out the doors, wait for the RPG’s!
This shouldn’t come as any surprise, since the Obama Administration (Operation Fast and Furious) trafficked firearms to Mexican drug cartels that were used to kill law enforcement officers in the US and in Mexico. The Democratic Party will end up being renamed, “The Hipocritic Party”.