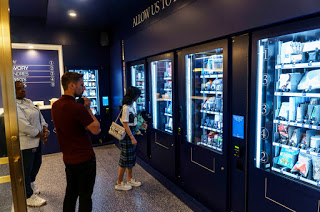 Six vending machines have recently landed on the concourse under the famed tourist Mecca — and they spit out everything from chicken pesto sandwiches and ready-to-eat cookie dough to a Brooks Brothers shirt, a shaving kit and an $800 diamond engagement ring.

The Vend, as it’s called by its creator and landlord, Tishman Speyer, has been attracting curious — and skeptical — passersby since it quietly opened in beta mode on the underground shopping concourse a few weeks ago.

But have they gone far enough. Call me Cupid. My entrepreneurial spirit kicked into gear. If they sell diamond rings, why not cubic zirconium settings. It’s a nice clear stone, virtually indistinguishable from a diamond, and you could cut the price to a fraction of what they want for a diamond.
And then I thought, what about putting cubic zirconium engagement rings in vending machines in Vegas (the Temple of the Living Elvis)? Or in local bars. If you fall in love at the bar and want to cement your commitment, buy her a ring on the spot – $100 (with a one karat stone) and you’re in business.

Or airports? You sit next to the man of your dreams on a long flight and upon landing, he can show you that he will love you tomorrow. The business model is big, I tell you. LSP & WSF – business opportunity.

Ok, it might not be as big as the religious trinket business, or the emergency clown nose, but it could sweep the nation – and the world.
Track and Field 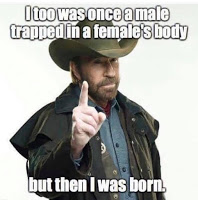 What do you do when you can’t be a varsity player in high school? You declare yourself a man/boy trapped in a woman’s body. And because the education industry is packed full of politically correct, progressive people, they accept your decision for the day or for the track season and you compete against the women and win the meets. Now, don’t get me wrong, there are plenty of schools that only want to chalk up a win for the women’s team. But eventually, as has been pointed out on this blog and elsewhere, you will only have third string men competing against third string men on women’s teams. And the guys can shower in the women’s locker rooms because they’re really women, after all. 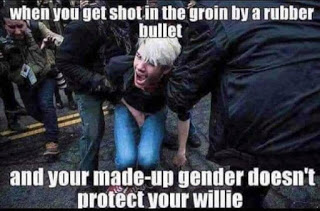 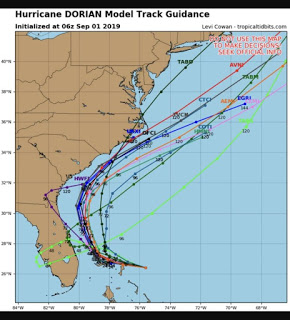 We all know that hurricanes are caused by climate change and ultimately, by Donald J. Trump. It’s settled science. They were caused by global warming before that the but never by Barack Obama. Just review the news of his 8 years in office.

Politicians tell us repeatedly that the world will end in 12 years because of the weather. It’s a sure bet, more settled science. At the same time those scientists, who can predict the weather in 12 years for a certainty, can’t tell you where the hurricane is going.

Then again, the Clintons charged Pay to Play to a lot of ChiComs during their tenure in the White House.

Pay to play is the name of the game in big political circles. It isn’t any different now than during Ancient Rome during the rule of the Caesars – or any other time. Donkeys and elephants wrap themselves in virtue, but that’s how it works.

Since you have tornadoes in your neighborhood, I expect that you haven’t put a sign up prohibiting them. It’s a progressive thing to do. Mount them under the gun free zone and you won’t be bothered again. If you don’t believe me, ask Pelosi or AOC.

Jim – I’m sure that a sign would work if you hung it somewhere in Kansas where the tornadoes were vexing. Trailer parks seem to attract them like honey attracts a bear. Posting signs in businesses keeps away shoplifters and signs warning illegal aliens to turn back at the fence strikes terror in their immigrant hearts.


Fredd said – It’s a relief to know that only Democrats engage in this sleaze and that my beloved Republicans are clean and pure as the wind driven snow.

Rep. Omar (D-MI) has problems brewing as even her own party would like to see her leave the House and the Country forever. Of course you could chalk it up to islamophobia. Sure she used campaign funds to pay for the guy who was servicing her while she was married to her brother, but I say – “picky-picky-picky”

St. Ronald and St. Donald were relatively clean. At least as clean as yellow snow, but not filthy like snow with a lot of coal dust on and in it. I don’t know how you can remain in politics and clean. I liked Duncan Hunter (R-CS) from San Diego and he’s headed for the Big House, so oops, LL.

WSF –  I believe someone said of LBJ that he went to Washington to do good, and did very well. Seems to be the name of the game.

LBJ  took theft and misappropriation to a high art. A genuine maestro of his craft.