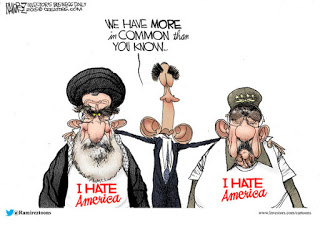 The war to decide who will ultimately call the shots in Islam (and in the Middle East) is beginning in earnest — in a way that is typical for that part of the world. This brief describes how that is unfolding without providing a back story per se. The Obama Administration favored Iran and the Persian Empire. The Trump Administration favors Saudi Arabia and the Arabs. America First as a concept means that we pick the side that doesn’t want to wipe us off the Earth.
Make of that what you will.
Saudi Arabia reported that over the weekend that Saudi ballistic missile defenses successfully intercepted a(n Iranian) ballistic missile fired from northern Yemen over the capital city of Riyadh. The missile, labeled a Burqan 2H, was apparently aimed at the capital city’s airport.
The Houthi Defense Ministry confirmed that their forces fired the missile and claimed the attack was a success that “shook the Saudi capital.” Despite the strike, Saudi officials say the airport remains operating normally.
The missile launched over the weekend was the third missile that targeted facilities around Riyadh. A launch on 6 February and one on 20 March attempted to strike King Salman Airbase southwest of Riyadh.
Once the Houthis ranged Riyadh itself, the missile threat changed the security environment significantly. For example, Saudi officials might need to develop and practice air raid drills and other civil defense measures. That time has arrived.
On 6 November, Saudi Arabian officials said that the latest missile attack may be considered an act of war by Iran. They said Saudi Arabia will not tolerate any infringement of its national security.

“The Kingdom reserves the right to respond in a timely manner to the hostile actions of the Iranian regime,” Saudi Foreign Minister Adel Al-Jubeir said. “Iranian interventions in the region are detrimental to the security of neighboring countries and affect international peace and security. We will not allow any infringement of our national security.”

Saudi Arabia is raising the stakes for Iran to compete for regional leadership. Juberi’s comments do not suggest when the Kingdom will retaliate, but they do indicate the Saudis are escalating their confrontation with Iran. Some form of retaliation is likely.
In that connection, the Saudis posted wanted rewards for information that leads to the location of the top 40 Houthi leaders. Information on Houthi leader Abdul Malik al-Houthi has a $30 million reward.
Iran’s Responds
Iran denied involvement in the Houthi missile program. Islamic Revolution Guards Corps commander Major General Mohammad Ali Jafari said that “these are their (Houthis’) own missiles with improved range” and that Iran has “no possibility to transfer missiles to Yemen.”
Jafari’s denial is absurd. Iran does not supply the missiles and components to Yemen, as Jafari said. It supplies them to smugglers who transport them to Yemen.
Missile debris that landed in Saudi Arabia has been found to have Iranian markings. In the past two years of fighting, shipments of missiles and missile components occasionally have been intercepted and have had their images posted to the web. The smugglers said the missiles came from Iran.
The Iranians are the main supplier for the Houthis via various smuggling networks. Any industry in Yemen has long since been destroyed in the fighting, so the Houthis can assemble missiles, but they cannot manufacture them.
Arab news media have provided detailed analyses of the smugglers, their tactics and points of entry by land and by the Red Sea. Without resupply from Iran, the Houthis would have depleted the pre-war missile inventory of the Yemeni armed forces more than a year ago.
Meanwhile in Lebanon
Saudi Arabia’s Minister of State for Gulf Affairs, Thamer al-Sabhan, said on Monday that Saudi Arabia would not accept Lebanon declaring a war on Saudi Arabia.

“We will treat the government of Lebanon as a government declaring a war because of Hizballah militias,” he said in response to the recent decisions taken by the Lebanese government.

Sabhan added that Hizballah militias are involved in every terrorist act that threatens Saudi Arabia, stressing that Saudi Arabia will use all political and other means to confront what he called the “Party of Satan.”

“We expect the Lebanese government to act to deter Hizballah,” he said in an interview with Al Arabiya. “Lebanon is kidnapped by the militias of Hezbollah and behind it is Iran,” he said.

Al Arabiya reported that Saudi King Salman informed the outgoing Prime Minister Saad Hariri of the details of Hizballah’s aggression against Saudi Arabia. The King said that the Lebanese government should be aware of the dangers imposed by these militias against Saudi Arabia.
Sabhan has identified Lebanon as a battle ground. Saudi Arabia is in a combative mode against Iranian proxies on two borders and in Lebanon. The remarks directed at Lebanon represent another escalation step in the confrontation with Iran.
Saudi Arabia has made a strategic decision that it must do more to block the Iranians and to stop the spread of the Shia heresy. The Saudis apparently sense that the Iranians are moving quickly to try to fill a regional leadership vacuum and that the Kingdom most prevent them from consolidating control in Lebanon. This is another ripple effect from the way the Syrian civil war is ending.
The end of the Syrian civil war with the Assad government intact is not leading to a restoration of conditions before 2011. New power brokers and new power structures have emerged. The underlying issues remain unsettled. The end of the Islamic State and the survival of the Syrian government are bringing no sense of closure.
Confrontations over pre-existing issues appear to be intensifying first in Syria and Iraq and now in Lebanon and Yemen. One conflict is ending, but a wider regional confrontation is taking shape.