(Fox News) Donna Brazile’s newly released 2016 campaign tell-all accuses the FBI and the Democratic National Committee she used to lead of a bungled response to the email hacks that threw the party into turmoil last summer.
Will Donna Brasile be invited to the Clinton’s for Thanksgiving? Maybe not. And I don’t think that Debbie Wasserman (the shamed and expunged leader of the DNC) will invite Brazile to join with her on the 8 crazy nights of Chanukah. BUT I’m sure that Brazile will strike both of them from the list of people she invites over for chicken and watermelon on Kwanzaa.
The Democrat talking points are now: Forget the past, let’s move on…bright future ahead…a thousand points of light…let’s put the Social Security fund in a lock box…the party of freaks and misfits.
And in California 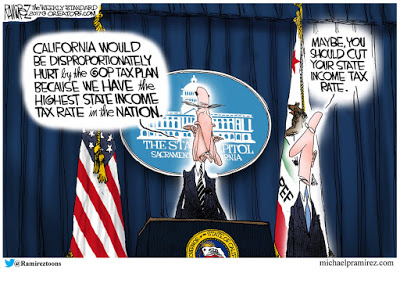 This, just in: California Governor Jerry Brown has denounced President Trump’s tax plan. He plans to lead a taxpayer’s revolt, which he will call the Tea Party.
Brown has been floating the notion of raising the lid on California income tax from 11% to 15%. The Trump program would put a spike in his vision of yet higher taxes.
Californians started paying 12 cents a gallon more than they used to in order to speed income redistribution on November 1. They all want to do their part to help illegal aliens (democrat party voters even though they’re illegal) settle in, and the $52 million per year that the tax increase will gather is only a small step in a much larger plan.
That plan may be placed in jeopardy by President Trump. Will Brown’s new tea party succeed? They’re budgeting now to hire protestor/participants and to pay to have them bussed to locations and to have signs made for them – which is not a new strategy for the Democrats. Will Rep. Nancy Pelosi (D-CA/San Francisco) be the first member of the New Tea Party?

As an aside, I signed up for the Joe Biden for President Exploratory Committee and promised to pay them (fingers crossed). The initial newsletters have been too dumb to share with you. Biden can only talk about the glorious Obama Years and the wonders of Obamacare. Apparently Rep. Pelosi is forming something too because she’d like to emerge like a phoenix from the shambles that is the Democrat Party. I expressed interest: “run, Nancy, run!” and will let you know what happens.