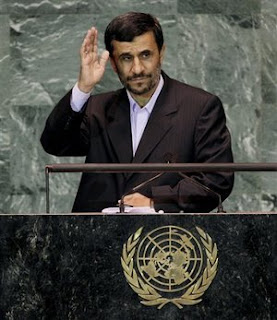 Enforcing financial sanctions against Iran won’t work. I suspect that Dear Leader has been told this by his advisors at the Department of Defense. Dear Leader may be a naive rube, but the CIA isn’t stupid and they are speaking with Him.

There are too many people and countries that simply want to make money and are happy to help evade sanctions. Recall the Iraqi oil-for-food scandal that reached all the way to… CHICAGO! (refer to previous blogs here on Virtual Mirage – Analyzing Obama)

Additionally, as shown with the Iraqi oil-for-food program, there is very little the international community can actually do to penalize sanctions busters. History teaches us a hard lesson in this regard.

Many countries simply will not comply and will go out of their way to aid Iran. Venezuela, for example, has already agreed to sell Iran 20,000 barrels of gasoline a day, something Iran will desperately need if sanctions were to really kick in. Iranian banks operate in Venezuela as Venezuelan banks, or that Ecuador is allowing Iran’s central bank in to operate. Nicaragua is hosting Iranian financial structures as well. Hugo Chávez and Daniel Ortega will pitch in with everything they have available to help Ahmadinejad.

Also consider Ras al Khaimah, a small and poor emirate in the United Arab Emirates. It has opened itself as an offshore haven and is busily registering hundreds of Iranian companies. Its airport is not encumbered by such things as strict cargo inspections or rigorous passenger manifestos.

The approach Dear Leader takes to the problem is one that HE KNOWS is doomed to failure, he’s promised the Russians what they want in order to forge a coalition that won’t work. Iran makes fools of us, of Dear Leader, an will move ahead apace in its efforts to create nuclear weapons, that it says will be used to destroy Israel.