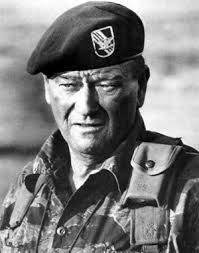 Who were your role models when you were growing up?
This past holiday season brought John Wayne to mind. Every Christmas Eve, he’d invite the Newport Police patrol guys to his house as they went to lunch (Code 7) to share a meal that he laid out. His family was there and sometimes his old Hollywood buddies like Ward Bond or John Houston would be there. I know some of the Wayne children better than others. I worked at the Orange County District Attorney’s Office with Aissa Wayne. John Wayne loved America and America loved “the Duke”. He had an optimistic view of the nation and it’s people. General Jimmy Stewart was another old Hollywood legend who lived his values.

Role models weren’t only people from the silver screen, but usually they weren’t gangsters. Today, they’re self proclaimed gangsters. Is it any wonder that the inner cities are teeming with would be murderers, thieves and assailants when that’s what their role models do? Listen to popular gangster rap music and ask yourself whether or not it’s uplifting to the soul. Progressives love gangsterism and it’s surprising because gangster music only discusses how women are nothing but self-propelled semen receptacles.

America accepted the first black (half black is apparently close enough) president as a role model. What sort of role model is Barack Hussein Obama?

In 2008, America elected a president from a broken home whose mother was sympathetic to communists; who as a youngster had formative relationships with a transgender nanny chosen by his mother and a bisexual communist pornographer “mentor” chosen by his grandfather; whose teenage friends were so devoted to drug use that they gave themselves a nickname derived from this habit, and developed their own vernacular related to methods of pot smoking; and whose chums as a young adult were Marxist professors and activists, a liberation theology preacher, and domestic terrorists. (h/t AT)

Today there is a log-jam of American celebrities rushing to the cameras to announce their “alternative lifestyles.”  Meanwhile, a TV network knee-jerkingly suspends its most profitable star for merely expressing the biblical moral view of Western history regarding sexual behavior that was still against the law in many American states ten years ago. One wonders whether A&E would fire a homosexual celebrity for saying heterosexuality was distasteful to him.  Consider all the feminist academics that pursue acclaim and professional advancement defending the view that heterosexual relations are inherently, “systemically,” oppressive.

Here, as with other elements of our moral lexicon, we have too long allowed political subversives to define the terms of discussion and to pick role models.  As a result, rational adult conversation is no longer possible in most company, since even to raise certain questions is inadvertently to frame the topic in a manner sure to arouse politically correct indignation.