Facebook
Twitter
Pinterest
WhatsApp
The elite owners of the GOP are still dazed and confused that NONE of their buddies appeal to the Party at large in the slightest. They were certain that we’d want Jeb! A hundred million dollars and 4 measly delegates later, they watched that domino fall. Rubio wasn’t their pick because he was a Tea Party type, but they rode that horse into the ground as well. Who would have thought that Trump would beat Rubio by 20 points in his home state?

Now they’re stuck with Texas Tex Cruz, who they really hate and Donald Trump, who they fear. John Kasich needs a psychiatrist, but that’s another story. Nobody sees Kasich riding into the GOP Convention in Cleveland as a white knight except John Kasich, himself. It would help if he read Don Quixote. In the alternative he could see the play, “Man of La Mancha”, where Don Quixote is defeated by staring into a mirror and seeing himself for the first time. I’m sure that he’s a nice neighbor, he’s been a political hack all of his life, but he’s not wanted as president this year.
It’s mathematically impossible for Cruz or Kasich to win the nomination straight-up, so the GOP is going to the rules – and there may be rule changes in store pre-convention. But don’t let that fool you. The GOP does not want Cruz and will throw him under the bus. He’s as dangerous to them as Trump is. They might accept Kasich because he’s been playing ball all his life, but the voters don’t want Kasich. 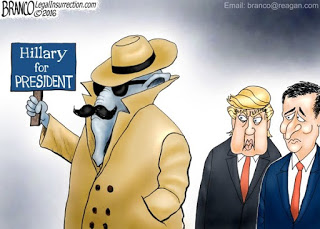 The GOP  Elite doesn’t care what the voters want. That should be obvious to all but the most block headed at this point.
They want a show that has the capability of encouraging donors to SEND MONEY (the more the better). Remember, it’s the show and the bells and whistles/smoke and mirrors that count here. If Hillary wins, it’s good for the GOP Elite because they can raise even MORE MONEY trying to defeat her ‘next time’. That’s how the game is played.
They’ll have a damning FBI report to wave around if she’d not indicted and will be howling with rage, and laughing as the donations to the GOP roll in. Like it, not like it?
That’s the system. And it’s rigged to maintain power. What is the difference between a Republican and a Democrat? What’s the difference between a white rat and a brown rat? I don’t know that it can be changed with a third party because of the money and power in play. We may simply have to live with it or go Galt. (Who is John Galt?) – Yes,  Grunt of Monte Cristo, I know that you live in Galt’s Gulch…