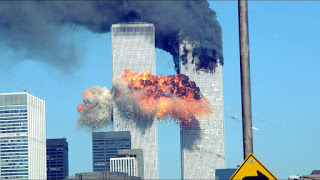 Facebook
Twitter
Pinterest
WhatsApp
There are things that I can remember with clarity. Though I was a boy, I recall where I was when the news came out that John F., and later, Robert Kennedy was shot. I can recall where I was when Space Shuttle Challenger blew up. I can also recall where I was on September 11, 2001 and the World Trade Center and Pentagon were attacked.
Nobody in America or the world thought on September 12, 2001, that the next President would be a (sorta Mohammedan) huckster named Barack Hussein Obama. Or that he would go on a world apology tour. Or that he’d try to change the remembrance of September 11 to a day that honored community organizers/rabble rousers/professional agitators.
And nobody in America or the world thought that Donald Trump would succeed him as the forty-fifth president. Trump, a patriot, undid the Obama legacy very quickly. Thank you President Trump.
On September 11, 2001, nobody thought that US Congress people would speak of the day as, “The time that somebody did something to somebody,” eighteen years later.
Remembering the attack by Mohammedans is important to us. The murdered have become our honored dead and to be fair, Muslims died in the World Trade Center along with thousands of other people who went to work that day.
Do any of you recall Omar al-Bayoumi? Cudos if you do, but I don’t expect you to. He was a Saudi Intelligence operative who interfaced with the 9/11 hijackers and other Muslims who smuggled explosives into the United States, intent on destroying a domestic target. The FBI took credit for uncovering the al-Bayoumi affair, and never once did they say, “Thank you LL for giving him to us on a silver platter.” It’s a long story with a less than pretty end. FBI. Par for the course.
On September 11, 2001, nobody thought that eleven years later on September 12, 2012, that Mohammedans would attack the US Consulate in Benghazi, Libya and the CIA annex, about a mile away and that a US Secretary of State would testify, “what difference does it make?” Nobody would have imagined that while US military assets were available to assist those beleaguered souls, fighting to their lives, that they would have been told to “stand down”.
On September 11, 2001, nobody thought that fifteen years later the FBI, the Director of Central Intelligence and the Director of National Intelligence would team up to launch a coup against a sitting  US President by generating false information and establishing an intelligence op. against him. There are a lot of things that Americans would never have considered on that day. They would never have imagined that the Democrat Party would transform itself into a National Socialist Party bent on repealing the Bill of Rights and the Electoral College eighteen years in the future.
And here we are.