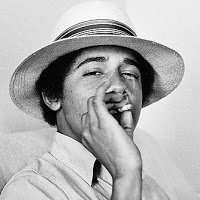 Facebook
Twitter
Pinterest
WhatsApp
Why did Obama crash and burn during the first debate? I’m going to become an Obama Campaign Volunteer (briefly) just to offer some thoughts on this one issue:
Why did Barack allow Mitt Romney
(metaphorically) to pull his pants down
in front of 65 million people?

The theories are beginning to emerge and I offer some encouragement and sincere advice for the next debate:

Suggested Remedy: When you’re out there in Vegas partying with Snoop Dog, and studying, stick to the brown leaf rather than over indulging on the green leaf.
You need to also be willing to pass the joint to Maher if you don’t want him to accuse you of essentially embezzling his dope.
Oh, and happy anniversary to you and the first lady.

Suggested Remedy: Next time, bring one of those oxygen tanks in a sling and put the tube around your head and under your nose so that you can breath. Mitt might not want to beat you up so severely if you do that. Governor Romney has a lot of compassion for the sick. If you hadn’t exempted yourself from ObamaCare, it might have been better for you. Maybe Michelle could bring you out in a wheel chair next time. That’s always a tear jerker. Then Reverend Wright can heal you and you can spring up and debate. (Oxygen bottle intact). If you get your junk handed to you again, you can blame that.
Andrea Mitchell – Jumps ship, then defends her champion

Suggested Remedy: Send John Sununu on an all expenses paid trip to Tibet before the next debate so that he won’t be around to respond to your insane claims and he’ll be out of cellphone range. Yes, John Sununu says that you’re lazy because you are, and you are disengaged… Maybe study next time instead of cutting it up with Letterman all night and smoking dope with Snoop and Jay Z.
Chris Matthews – I don’t feel a tingle anymore!
Suggested Remedy: Don’t talk about the mess we’re in, Mr. President. You have been President for 4 years. Democrats have had the Senate for 6 years. Democrats had BOTH Houses from 2006-2010. Congress gave you a $1 trillion stimulus, $50 billion auto-bailout,﻿ Dodd-Frank, $2 trillion health care bill, etc. If you don’t take responsibility for that, Romney will pull down your pants again.
I guess you can bring out the catch all and simply blame President George W. Bush… That’s a real campaign winner.