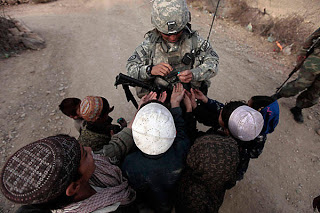 In the aftermath of the attack of fundamentalist Muslims on the World Trade center in New York City, the US was faced with a problem. The attack had been carried out by Saudi nationals — and Saudi Arabia is a friend of convenience, so we couldn’t attack them. Some of the Wahhabists had been trained in Afghanistan and the Taliban government in power at the time was a fundamentalist Islamic government. They offered aid and comfort to the men from al Qaeda. An invasion wouldn’t ruffle THAT many international feathers and once the US was in place, we would hold a very strategic piece of real estate.
barack hussein obama, in search of a war he could call his own, adopted the war in Afghanistan and decried “President Bush’s War” in Iraq. Even though barack obama might have been a good civil agitator and community organizer in Chicago, he’s been found inept at everything else he’s done, include finding the ability to (a) understand the war in Afghanistan, and once understood, to (b) frame it in the appropriate context.
We have a role to play geopolitically in the Asian Subcontinent whether we like it or not and as with Iraq, “you broke it, you bought it”.
barack hussein obama made a major mistake to put Afghanistan as a cornerstone of US foreign policy, and setting any timetable for withdrawal is foolish. There will be violence in Afghanistan in my grandchildren’s lifetime in much as there was violence there in my grandparent’s lifetime. So what?
America needs to keep troops there with an eye toward a LONG process of nation building, not a quick shoot and scoot. That’s the only way we’ll be successful. Surges come and surges go, but everyone in the region who is NOT an American waits to see if we’ll commit to working with the problem. And nobody has anymore faith in obama there than the American people do at home.