Our fellow blogger, John Coffey, mentioned in comments the other day that he was waiting for the pirate book that I’ve been working on. For those of you who are newer to this blog, I discovered during a diligent family history search that in my mother’s line, there were genuine pirates. My family took this quite negatively but the records, many of which are on-line, don’t lie. I had plans to travel to North Carolina this month or next to do site research for the book, but the Chinese Plague put a spike in that. Maybe later this summer or in the Autumn? 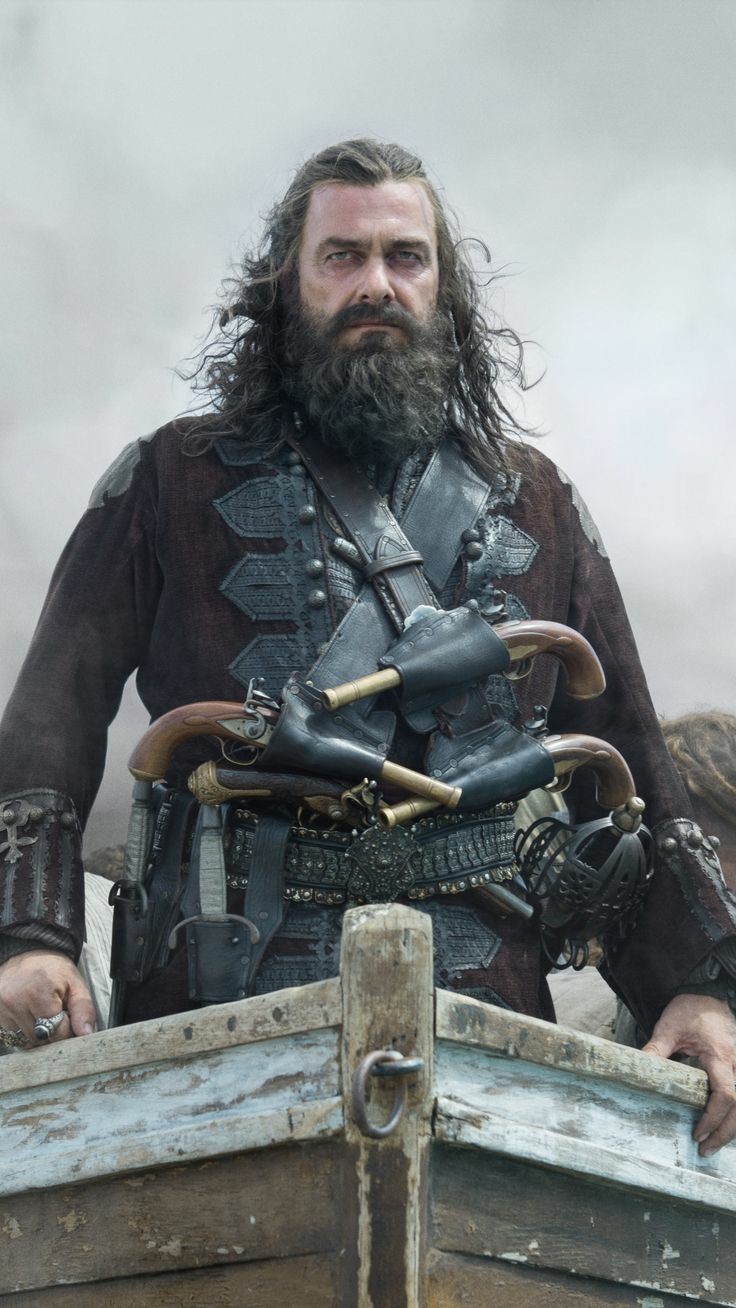 There is solid evidence that Blackbeard’s final stand near Hatteras, NC, took place on land that was owned by ancestors of mine based on title searches. John points out in his comments that pistols were often weapons of last resort, and that’s true. In that time, a good sword, cutlass or boarding pike was often more effective since the powder in the flash pan of pistols could get wet in a maritime environment, causing a misfire.

During my research, I found this from the Admiralty courts in England contemporaneous with the ‘plague of piracy’ of the day.

“Dr. Fisher Littleton presided over the Admiralty court and took the view that those who adhered to James II were “not enemies, but rogues”. The prosecution proceeded at the Admiralty Sessions held at the Marshalsea in February 1694, even though the nine accused men asserted that they fought under a lawful commission issued by James II. At these hearings, Captain John Golden and Thomas Jones were convicted for treason and Patrick Quidley and Darby Collins for piracy. On March 5, 1694, they were hanged.”

Patrick Quidley was an ancestor of mine and his story is melded into the novel, which I hope will end up as a trilogy. Scrupulous research into the childhood of Edward Teach, better known as Blackbeard the Pirate has been required since the first book in the series touches on Edward Teach as a young man. Unfortunately art has to fill those many pieces of DNA that are missing.

It’s a cold, wet, winter’s day in Dover, England. The gray, leachings of a false dawn have given way to a pale winter sun. Under normal circumstances good and honest men would be huddled around their hearths. The merchants who made their living from the sea are all in, warehouses are packed with goods but they aren’t moving, the ships are secure in their moorings, and a warming bumper of rum gets people through the short days and long nights.

The weather masks the conclusion of an arrangement that has brought wealth to certain men of Dover. The date is January 10, 1685 and the Quidley families of Orwaldstone, then still referred to as Old Rye, and Margate Limb of Dover, have gathered together in council at St. James Church in the crowded city, near the heavily fortified ramparts of nearly impregnable Dover Castle. A steady decline in sea traffic entering the Cinque Ports over the past two years and the increasing pressure for more revenue from taxation from King Charles II has been a vexing matter. The pressure has been applied to the King’s tax collector, and as was explained at the time, “If you have a tormenting boil, you lance it.”

Lancing the boil has brought the sorts of issues that one inevitably faces in matters of cause-and-effect. For now, the downside to a tacit approbation of piracy on the high seas has been set aside in favor of its tangible rewards.

The private meeting in the rich stone church is presided over by John Beaumont, Lord Warden of the Cinque Ports and Constable of Dover Castle. The forty-nine year old Beaumont will stand for election to Parliament later in the year and he will be raised to a lieutenant colonelcy in Our Holland Regiment (the 4th Regiment). Both of these achievements will require more money that he has on hand as of January 10th, which is why he agreed to meet with young, aggressive, impatient, Captain Patrick Quidley and his uncle, Squire David Quidley, late in the season the preceding Year of Our Lord, 1684. By doing, he became the third member of a conspiracy. Both Quidleys are high commoners and prominent men within the family that has prospered in shipbuilding, drydockage and repairs to shipping in the ports that the Lord Warden oversees.

John Beaumont is also the royal tax collector who sees to the franchises, liberties, customs and usages of the ports and gathers such as is owed to the crown, taking a salary for himself. Unfortunately, Beaumont’s taste for the gaming table and wooing other men’s wives has been his undoing. He has taken liberties with the Royal tax fund that he holds in trust. At the beginning of the new year, after the Feast of the Epiphany, he will be required to settle financial matters with the Charles II’s factotums.

Though he does not know it today, Beaumont will be favored after the King dies in twenty-seven days by his successor James II, who will need all the friends he can get. But that is still a month in the future.

Outfitting the privateer Gull, a brigantine of ten, eight-pound guns and two swivels, required a significant investment. Warships must be constructed with stouter framing and ships guns come dear. Other secret processes increased the price as well. The funds have been raised by offering shares to interested members of the family, with ten percent ownership gifted to the Lord Warden in exchange for a vaguely worded letter of marque of dubious legal standing.

Today the shareholders have gathered to count the return on the first voyage of the Gull.

The hum of conversation between two dozen Quidleys diminishes as the Lord Warden, flanked by four Hollanders in uniform, carrying snaphaunce muskets, takes the dias.

“His honor, Constable John Beaumont.” The sergeant of the guard announces, quieting the meeting without threat of malice.

John Beaumont is a tall man with sly eyes who has grown soft in the middle. He’s chosen to wear his honorary Admiral’s uniform today, but still looks every bit the profiteer. He smiles broadly with his brown, rotting teeth and dismisses the guard, who follow Captain Patrick Quidley, master of the Gull, from St. James Church, through a side door that leads to the graveyard.

“Captain Quidley and Squire David have called us all here, yes even me, to announce the success of our joint venture in commerce, which we shall all toast with good brandy from South Africa!” As soon as he makes the announcement, servants begin to distribute mugs and then the toast is offered by the Lord Warden, himself, with his own hand, “King Charles, God save the King!”

No sooner is the toast downed by the thirsty Quidleys and promptly refilled, than Captain Patrick Quidley returns into the church, flanked by the musketeers and by seamen, also armed with muskets. A stout cart is wheeled in with a chest on it. The cart is pushed to the front of the church and is opened. It’s filled with gold and silver plate, gold dubloons, pieces of eight and religious articles of gold and precious stones.

The Quidley family are all aware of the haul from the Spanish galleon, San Jose de Padre of eighteen brass guns, which their most esteemed cousin, Patrick, took at sea in the Brigantine Gull.

San Jose de Padre enroute Lisbon, carrying His Eminence, Antonio Brandao, Archbishop of Goa on his way home following his term in office, blundered into the path of the Gull, which would have been content to board and plunder any ship it had the capability to best at sea.

Quidley lay in wait in the passage between the Canary Islands and the coast of Morocco, which was hardly an original place to ambush a slow, heavy, ship beating up the coast against the wind. The lumbering Portuguese galleon, badly in need of careening, managed one broadside against the Gull only to have four of its brass guns explode due possibly to wear and poor handling.  The Gull, with fresh canvas and a new, smooth, hull, danced around her and swept her decks with grapeshot, killing the captain and the Archbishop. The first lieutenant raised the flag of the Holy See. Gull raised the black flag and then the lieutenant struck his colors.

It would have been less of a problem if England and Portugal had been at war. As fate would have it, 1684 was one of the few years that England was not at war with anyone and neither was Portugal. In fact, they had been allied through the marriage of Catherine of Braganza and Charles II, and that made Quidley’s choice of a Portuguese galleon a dangerous one. In his defense, Captain Quidley said that he hadn’t known of a certainty that it was Portuguese until they boarded her and found the body of the Archbishop and confronted the terrified crew.

Under other circumstances, the San Jose de Padre might have been taken as a prize of war. As it was, there wasn’t much to do but salvage what they could, maroon surviving members the crew and half a dozen priests on La Gomera Island in the Canary Chain and scuttle the San Jose de Padre.

In addition to the Archbishop’s personal fortune, the ship’s cargo consisted of 230 bolts of silk fabric, 84 casks of saltpeter, 30 chests of opium, 45 casks of indigo, 70 hogsheads of wine and 100 of brandy taken on in Capetown. 12 puncheons of a better grade of brandy bore the archbishop’s seal. 15 Firkins of the very best brandy were stored in the archbishop’s quarters, four of which had been emptied prior to the Gull’s boarding.

The gold and silver delivered at the meeting in the church account for over half of the value of the take, estimated at £35,000 less certain commissions that needed to be paid on the cargo to quietly slip it into the commercial mainstream.  Subtracting the £9,800 cost of the sturdy Gull, it left £22,800 to be distributed of which £5,220 went directly into the pocket of John Beaumont, the King’s Warden and associated bribes amounting to an additional £400.

A lesser man, with command of a regiment of foot at his fingertips might have thought to seize the treasure in the Church of St. James that very day but the plain truth is that the pirate crew were better armed, more numerous, and there would have been a lot of explaining for the Warden to do. His Majesty’s infantry, while capable in drill and musketry, could not match the savagery of heavily armed pirates in close quarters.

Following the division of treasure including shares given to the crew of the Gull, there present to oversee the transaction, the Quidley family disburses back to their homes, the Warden takes his gold down a narrow, cobbled street, and across the courtyard, had it loaded into a wagon drawn by four stout horses, which hauled it up the hill to Dover Castle and the matter rests for the moment.