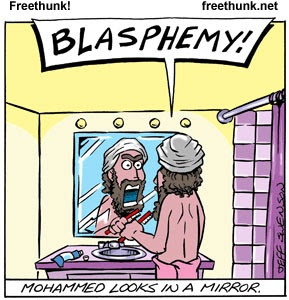 Outraged Muslims are reportedly planning a May 1 demonstration at the Amazon headquarters in Seattle, Washington. The company is under fire after several Muslim security guards demanded time and space to pray five times a day, while on the job.

The guards contend in a lawsuit filed this week that the subcontractor who employs them does not appropriately accommodate their faith and retaliates against those who speak out.

There are a few things that stand out here. (1) Why would you want to hire a Muslim security guard? Think on that one for a while. (2) Can’t they drop and pray at the lunch room? – The whole aloha snack bar thing seems appropriate in a place where people are nuking frozen burritos, slurping down vending machine coffee and pulling left-over spaghetti stuffed into tupperware out of the common refrigerator. (3) I’m sure that the broadcast of the muezzin calling the faithful to prayer will offend somebody and we wouldn’t want that, now, would we? (4) Why can’t Amazon host a “draw Mohammed” competition? (5) Finally, there would be something terribly wrong going on if Muslims weren’t outraged at something (a daily event for the religion of peace).
Amazon has dedicated prayer rooms for Mohammedans (note the linked article above) The Muzzies are mad because they don’t have ENOUGH OF THEM. Amazon does not provide dedicated prayer rooms for Catholics, Anglicans, Lutherans, Baptists, Mormons, Sikhs, Animists, Native Americans (sweat lodges), Pagans, Buddhists or Hindus – and a mini casino for the agnostics and atheists. I call that religious discrimination.