Holder in Contempt of Congress 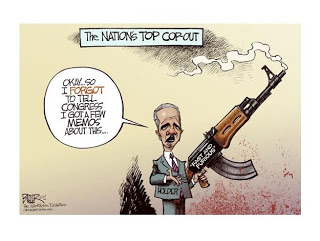 The House Oversight and Government Reform Committee voted 23-17 along party lines to hold Attorney General Eric Holder in contempt of Congress today, pushing forward with the action even after the White House slapped an 11th-hour executive privilege on subpoenaed documents still sought in the Operation Fast and Furious investigation.
Chairman Darrell Issa (R-Calif.) said an official communication from President Obama had not been received by Congress at the time of this morning’s meeting, but the committee had received a multi-page letter from Deputy Attorney General James M. Cole informing them of the action just minutes before the hearing, which was scheduled earlier this month.
Essentially, President Obama is using his position to stonewall further inquiries by the House Oversight and Government Reform Committee. I understand that he’s trying to shield Attorney General Holder from prosecution and perhaps himself from unwanted disclosures in the run up to the November 2012 election. But everyone seems to see it for what it is.
“We regret that we have arrived at this point, after the many steps we have taken to address the Committee’s concerns and to accommodate the Committee’s legitimate oversight interests regarding Operation Fast and Furious,” Cole wrote. “Although we are deeply disappointed that the Committee appears intent on proceeding with a contempt vote, the Department remains willing to work with the Committee to reach a mutually satisfactory resolution of the outstanding issues.”
“Our purpose has never been to hold the attorney general in contempt,” Issa said in the hearing’s opening, noting that Holder was offered an accommodation to produce the requested documents on the Fast and Furious gun-walking scandal. “As late as last night his offer was only to give us a briefing and then only if we ended the investigation.” (LINK)

As early as October 2009, officials in both the Central Intelligence Agency and the Drug Enforcement Administration objected through their respective chains of command about weapons smuggling and related confidential informant operations in the Republic of Mexico on the part of the Bureau of Alcohol, Tobacco, Firearms and Explosives and the Federal Bureau of Investigation, including what the world has come to know as Operation Fast and Furious, according to previously reliable sources familiar with the intelligence operations of the United States.

Because of the refusal of the ATF and FBI at lower levels to allow “deconfliction” with the CIA and DEA, these complaints, according to the sources, were eventually forwarded to the National Security Council of the White House, including Kevin O’Reilly, a State Department employee seconded to the NSC, O’Reilly’s boss Dan Restrepo, then Director of Western Hemisphere Affairs at the NSC and Denis McDonough, then NSC’s head of Strategic Communication and since then promoted to the Deputy Director of the National Security Council. McDonough, described in one biographical sketch as a “tough guy” and “Obama’s single most influential foreign policy adviser,” is also a personal friend and “basketball buddy” of the President of the United States.

The result, said one source, “The word came back from NSC, ‘butt out.'”

The President of the United States would seem to have some guilty knowledge of this program and clearly is trying to distance himself from it. Which is precisely why he has asserted executive privilege. However, Holder is still in contempt of Congress.
What is President Obama’s track record on Executive Privilege? Check this out (LINK).