Home Blog Post “Realit...
Facebook
Twitter
Pinterest
WhatsApp
I rarely watch the Bravo channel because it’s principally the gay/lesbian channel and I’m not. However I do have girls and they were watching a new reality television program: Below Deck. 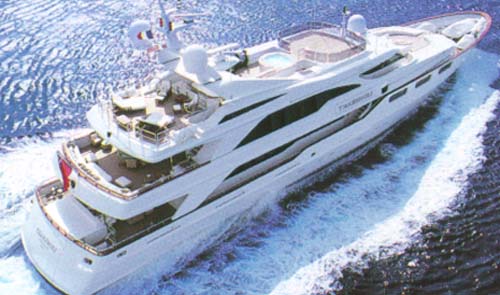 A reality show on a 164′ yacht? I did the math. A dozen crew, likely matched by a dozen film, sound, lighting and production people and charter guests. It sounded to me more like a monkey f-ing a football, so I sat down and watched.
The Scenario: Bravo rented the Cuor di Leone for five weeks and renamed it the Honor for the sake of the show. They kept Lee Rosbach (the Cuor di Leone’s first officer, first mate and the ship’s engineer) and added eight miscellaneous people who were thrown together as crew. Lee Rosbach plays the captain in the television series. Rosbach is the only one of the crew who has any degree of credibility.
Bravo assembled an odd mix of people as “reality cast” in addition to the captain, first mate and the engineer, who you don’t see that much of.
Ben Robinson, Chef – Presumably he actually is a chef. He speaks like an Aussie but he’s a US Citizen.
Adrianne Gang, Chief Steward – Never knows where things are and seemed overwhelmed but they dumped her on board and told her that she was in charge of managing two very spoiled girls that the producers found to be ‘crew’.
The rest of the crew consist of a gay porn star (it’s Bravo); Kat – a lush – with big American breasts who drinks poorly and is always trying to get laid but never succeeds; Samantha, a twenty-something industrial engineer who shares a cabin with one of the immature male realty-type crew — who waits two episodes before he crawls into her bunk; Aleks Taldykin “cruise boat captain to the stars”, based in Los Angeles and acting first officer.

The charter guests presumably paid for charters knowing that they’d be crowded aboard the really nice yacht with amateur crew and a LOT of camera and production people from Bravo. Which means that they either like being in front of the camera or they got a huge discount and figured, why not go? And this is where the whole thing breaks down, because the guests are ‘wooden’ as they are surrounded by cameras and boom mikes, trying to be “real”. I’m guessing that they didn’t pay for the boat ride, only for the tip that they gave the pretend crew. Maybe it was also a pretend tip?

Will there be a second season of Below Deck? Who knows?