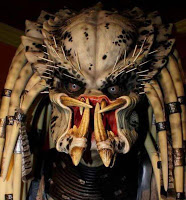 Hollywood Essentials
Because even Fox News has a movie section…
When last I checked, there is a general intention to produce “Predators 2”, a sequel to Predators, but there has been no movement toward retaining a writer or moving forward on the feature film. What is THAT all about?
The good news is that Dead Man Stalking, the last of the Chronicles of Riddick series is due in theaters in September. (None of you are afraid of the dark, are you?)
Noah (Russell Crowe) is coming in another apocalyptic drama as the Biblical Noah suffers visions of a deluge, and takes measures to protect his family from the coming flood. (Is “the flood” a metaphor for the Obama Administration? We’ll have to wait for the film’s release, scheduled for 2014.)
Ridley Scott is confirmed as being in the process of creating a sequel to Blade Runner.
FAA Weighs In
The FAA announced that shooting down a drone is a crime. It’s time to declare that the Department of Homeland Security doesn’t need to send a drone to my house. I will confess all here and now.
Of course the NSA knows all of that because it collects my blogs (and everyone else’s). If only the NSA would learn to read and ponder.
Obama is Going on Vacation Again

No, it’s not really news.