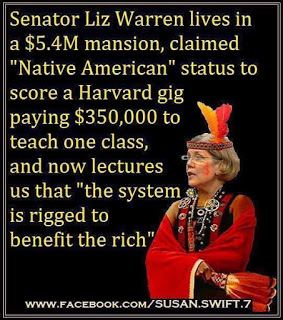 Progressives have picked a champion in the fight against Donald Trump, but of all the people out there, they picked one with even less credibility than Hillary Clinton. Hillary may be a liar, but Elizabeth Warren’s ENTIRE schtick was based on the fact that she’s an Indian (also referred to as a Native American in some quarters though anyone born in America is a Native American by definition). But she’s not an Indian.
Look, I don’t blame her for lying her way to the the top of a political party that is entirely constructed on fabrications…it’s what you do when you’re a liberal Dem/Prog. The whole Elizabeth Warren experience is not without precedent. That she would attack Donald Trump (who calls her “Pocahontas”) as being ‘inauthentic’ is taking the theater of the absurd into a realm that I never thought possible. 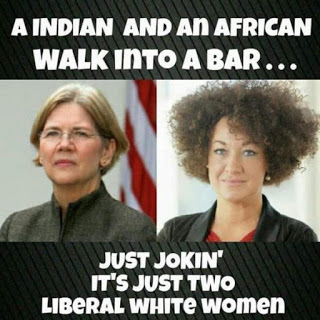 There are a lot of things going on that I never thought possible…and not in a good way.
The concept of credibility is absolutely vacant to roughly half of the US population – most of whom watch the mainstream media and swallow what they are told to believe. What a bunch of lemmings – but in a democracy they all get a vote. And they’ve been voting hard for a long time to have the government take from me and give to the shiftless.
It’s Father’s Day in a land where there is a direct assault on fatherhood. Somewhere around 90% of African American children are born into homes where there is no father. Progressives don’t mind the stat, but it results in a population that is best represented by Detroit, Baltimore and inner city slums (who vote themselves free cheese with regularity).