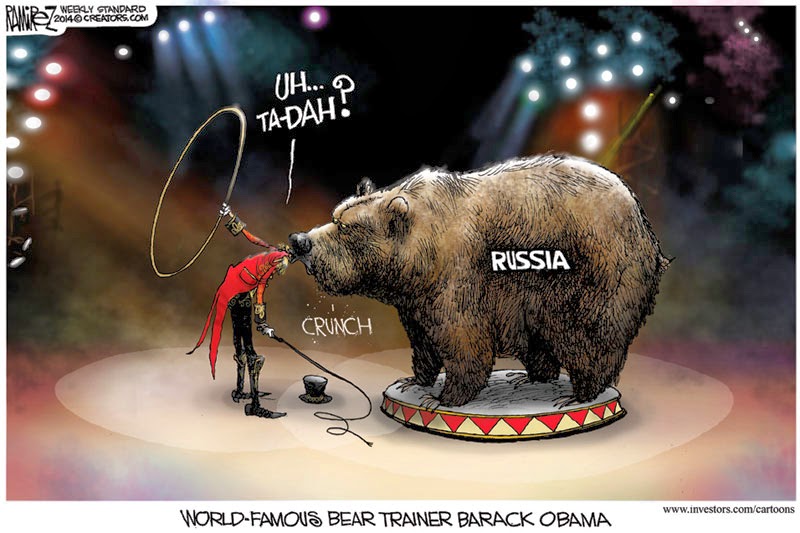 The entire planet jeers at US President Barack Hussein Obama, and nobody laughs harder than the Russian people.

(IBD) British Prime Minister Neville Chamberlain called the assault on Czechoslovakia “a quarrel in a faraway country between people of whom we know nothing.”

He signed the Munich agreement, which let Hitler’s aggression stand, saying it guaranteed “peace in our time.” In fact, it guaranteed the subjugation of Europe.

Unfortunately, we hear echoes of Chamberlain from Obama today: “The Ukraine government has said it is prepared to negotiate with Russia,” Obama said. “And the international community has been supportive of a diplomatic process that would allow a de-escalation of tensions, a moving back of Russian troops from Ukraine’s borders, and rapidly organized elections.”

Barack is the master of the red line, a lampooned pacifist who even in liberal European circles is held up as an international joke.  It’s not just this situation in Ukraine and the Crimean state, which is no longer a state of Ukraine. Obama has few options. Why are his options so limited? Part of it comes with Obama’s selection for a winning team. Will Europe and NATO really want to raise the ante with chronically weak Obama, Kerry, Power, Hagel, Clapper, and Brennan in control?  How can an administration, which cannot manage a website in the digital age prosecute a successful economic or shooting war, one with atomic potential.

Any US general who might be a tad independent or think for himself has been put out to pasture. The present litmus test for admirals and generals is ‘political suitability’ in the Obama mold, not guts and war fighting ability. It plays well at White House rose garden ceremonies, but speaks very badly for results in combat.
America has to wait on the sidelines until another general national election takes place in 2016.