The President’s Jobs Act – Yet another Obama Boondoggle? 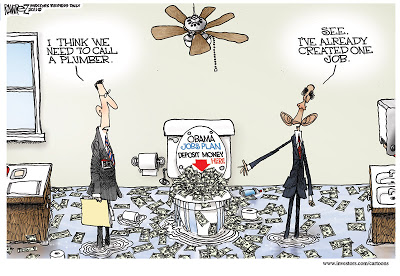 Facebook
Twitter
Pinterest
WhatsApp
The American Jobs Act (read it at THIS LINK) is 199 pages long. The President says that it is a bill that “must be passed”. So it might be a good idea if you read what he’s proposing to spend half a trillion dollars of your money* on. This Bill has a few sections that seem reasonable and several that are problematic. I don’t represent that this is a complete analysis of the Bill. I’ve borrowed comments that others have made and will include them in the commentary.
*No it’s not really YOUR money. Even though he claims that it will be money saved from other places, most people including his fellow Democrats believer that we’ll end up borrowing it at interest from the Chinese.

Three Years
Section 312 (Page 92) extends unemployment benefits for those receiving benefits for one additional year (to a total of three years). There will also be no waiting week. You can collect immediately. I do understand that some may think that I’m cruel to suggest that three years of unemployment benefits are simply too long a period to offer. But that’s what I’m suggesting. The President wants voters to be happy with the money that they’re getting so they’ll drop a vote his way. They used to call that ‘buying votes’ with taxpayer dollars**.
**I think that they still call it that in Chicago, but it’s an art form there, not something shameful.
A New Protected Class (analysis link HERE)

Sections 371-379 (Pages 129-134) are titled “Prohibition of discrimination in employment on the basis of an individual’s status as unemployed“. That’s right, the bill would add “not currently doing anything useful for money” as a protected class in the realm of employment discrimination to the ones we are used to, such as race and sex. It states, in part, that “[i]t shall be…unlawful…for an employer to…publish in print, on the Internet, or in any other medium, an advertisement or announcement for any employee for any job that includes…any provision…indicating…that an employer will not…hire any individual for…employment…based on that individual’s status as unemployed”. The provision also outlaws hiring decisions on the same basis.

Some might say that’s a good thing. Why dump on the down-and-out who are otherwise qualified? The answer is that in practice, this is a provision that primarily benefits plaintiff’s employment lawyers, as the section goes on to award attorneys’ fees and a $1000 dollar-a-day award (for days not having been hired, and that can really add up by the time you get to trial) to anyone who sues under this provision. I’m allowed to say that since I used to be a plaintiffs’ (and also defendants’) employment lawyer.

President Obama is creating a nightmare for any prospective employer.
Look for the Union Label (analysis link HERE)

Section 5 “Wage rate and employment protection requirements.” It states, in part, that “all laborers…employed…on projects funded directly by or assisted in whole or in part by and through the Federal Government…shall be paid wages at rates not less than those prevailing on projects of a similar character similar in the locality as determined by the Secretary of Labor…”

In non-right-to-work states at least, the “prevailing rates” will almost by definition be determined by the state of labor union contracts, having the effect that any employer who happens to employ non-union, and thus often more affordable, labor, will nonetheless be forced to accept a wage schedule handed down by the federal government commensurate with what union employees earn. At that point, there would no longer be any incentive at all to avoid non-union labor on a cost basis.

I haven’t read a lot of analysis on Stimulus II (American Jobs Act), but it would seem to me to follow Stimulus I into history’s abyss as one of those ‘money down a rat hole’ schemes. Stimulus II will cost 20 times the nation of Greece’s deficit. Roll that around in your head for a moment.

Likely. Stimulus I was a complete failure by all accounts since it didn’t create more than a handful of jobs after spending nearly a trillion dollars. Why should we even entertain the notion of Stimulus II?

Let’s take a look at some of the boondoggles we’ve learned about in Stimulus I ($800 billion).

Operation Gunrunner, a secret program by which the Department of Justice allowed firearms to ‘walk’ into the hands of Mexican drug cartels. –Funded by Stimulus I
$9 billion went to fund housing on Indian Reservations. The Dept. of the Interior has an investigation running there regarding fraud, waste and abuse but won’t discuss it publically.
Green Energy Scams (LINK)*** SpectraWatt, Inc, Solyndra, Mountain Plaza, Inc., Olsen’s Crop Service and Olsen’s Acquisition Co. have all failed to date. We wait in anticipation of more fraud, waste and abuse. The White House claimed that Stimulus I would create 44,000 jobs in Green Energy. OMB reported that it created 3,500. And some of those will be lost with the failure of these bankrupt companies.

***A 2009 report by the Energy Department’s inspector general warned that DOE lacked the necessary quality control for the $38.6 billion loan-guarantee program.

To report this blog about the President’s “Jobs Bill” to President Barack Hussein Obama’s Attack Watch, where you denounce your friends and neighbors to the government, please CLICK HERE – ATTACK WATCH