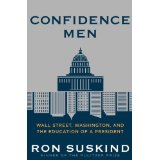 The Obama White House has a long record of mis-steps, of bungles and blunders. There have been a number of books that have come out about Barack Hussein Obama jr. from the tell-all book written by Larry Sinclair, his homosexual lover: Cocaine, Sex and Murder to Ron Suskind’s new book,  CONFIDENCE MEN, which will be coming out next week.
Suskind had unique access to the White House, interviewed staffers and now the White House is unhappy because he’s printing what they told him and naming names. Obama can take the author’s to court for libel if what they write is false. But that hasn’t happened with any of these books. And it’s unlikely to happen with Suskind’s account of sausage making in the White House.
Obama the man simply isn’t impressive.
Obama the leader is less impressive.
Obama the visionary has a vision that is strongly at odds with the vision that most Americans have of themselves, of their country and of their history.