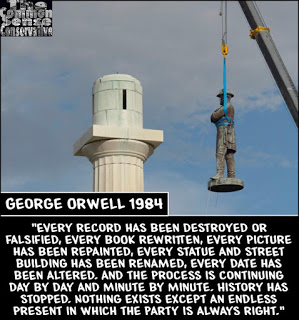 On 21 May, Turkish President Erdogan announced that the state of emergency would continue until the country achieved “welfare and peace.” The state of emergency allows President Erdogan and his cabinet to issue decrees without parliamentary oversight or review by the constitutional court.
Erdogan is instituting a perpetual state of emergency. It would seem to make the constitutional referendum in April unnecessary because Erdogan decides when welfare and peace have been achieved.
The North Korean regime justifies its authoritarian restrictions in a similar manner.
As with North Korea, Turkey will begin rewriting its text books to reflect the “new history”.
Meanwhile, in the USA, the progressives are busily trying to rewrite the history of the nation to reflect how they would prefer that it reads. Because university professors (elites) are beyond reproach, they are given a free hand in their interpretations.
China’s Browbeaten Neighbors
China is causing some interesting changes in the Asian-Pacific geopolitical landscape as small nations are banding together to stand against the hegemon of Asia.
Japan and Vietnam
The Japanese Maritime Self-Defense Force destroyers, JS Izumo and JS Sazanami, arrived at Cam Ranh Bay on 20 May. (See map below)
The destroyers will join other ships, including the US Navy’s high-speed transport ship Fall River, in joint exercises for humanitarian support and disaster responses.
The commander of the Izumo flotilla, Rear Admiral Yoshihiro Goka, said the port call shows Japan’s determination to make further contributions to peace and stability in the Asia-Pacific region. He also said Japan will improve security cooperation with the member nations of the Association of Southeast Asian Nations (ASEAN).
This is the first time that the JS Izumo has docked at Cam Ran Bay. It is a “helicopter destroyer” that looks like a pocket aircraft carrier and the largest ship in the Maritime Self-Defense Force. It is Japan’s first show of naval force in Southeast Asia since World War II.
On 1 May, the Izumo task group left Japan on a 100-day voyage to Southeast Asian and Indian Ocean countries. In July, it will join the Indian Navy and the US Navy in this year’s Malabar naval exercises in the Indian Ocean.**
The Philippines

“The conversation was very frank. There was mutual respect, there was mutual trust,” Cayetano told reporters. “The context was not threatening each other, that we will go to war. The context is how do we stabilize the region and how do we prevent conflict.”

He said, “I will not contradict the president’s words. I am just telling you … my interpretation: there was no bullying or pushing around, it was not a threat.”

Presidential Spokesman Ernesto Abella said the Philippines was “very clear that we are not giving up our claim of sovereignty and sovereign rights.” (sorry, Ernesto, the Spratleys are gone to China – that might not have happened if you’d kept the US as an ally – but that ship has sailed and all of those drilling rights went with it)
Philippine President Duterte was pandering to his audience, the coast guard auxiliary. Many Philippine veterans and Duterte’s political opposition criticize the President for compromising Philippine claims to sovereignty to some of the Spratly Islands. Some have called for his impeachment because of his failure to press Philippine rights, as supported by the findings of the International Arbitral Tribunal.
Chinese Assertions
In an act of imperialism, China annexed the Spratley Islands,  built man-made islands, laid runways and fortified the islands. Now they ‘belong to China’ despite (toothless) findings by the UN to the contrary. China will now defend that territory in the South China Sea as if it was mainland China as a matter of law.

We don’t know what the Chinese told President Duarte. Chinese President Xi might have said as a statement of law and fact that China will go to war in the sense of use military force to stop a Philippine attempt to drill for oil in the Spratlys.

Chinese leaders are required by the Anti-Secession Law of March 2005 to prevent by all means, including force, the alienation of any land over which China claims sovereignty. Thus, Taiwan cannot declare itself an independent republic without the certainty of a Chinese invasion attempt. The Uighurs cannot secede from western China without incurring a Chinese ground force invasion. Any attempt by any Spratly Islands claimants to engage in new exploitation of sea and seabed resources without Chinese permission can expect a Chinese sabotage or an attack to prevent it.

** A Comparison in fleet size between the UK and Japan. Both are industrialized island nations that depend on trade for their existence.