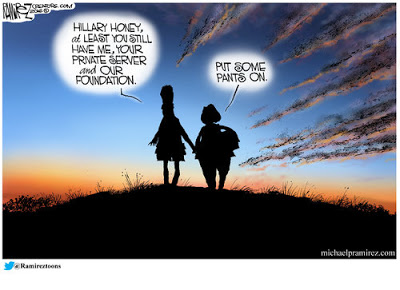 As the Clintons stumble off into the sunset together, we can all take solace in the fact that they have each other to grow old with… nobody could be more deserving than they both are.

Now we have speculation as to how a Trump Presidency will work:

– I expect to see a Free/Fair Trade Deal between the UK and the USA as part of President Trump’s efforts to repair the damage done by Barack and his gang of anglophobes. Churchill’s bust will likely return to the Oval Office and things will be set right with the Brits.

– Glen Greenwald wrote an interesting article published in the Washington Post, of all places. He discusses how progs excoriated the evil policies and practices of President George W. Bush, but the minute Barack took office, he not only embraced them but expanded on them. The author considered this shocking and now worries that Trump will be given these abusive powers Obama took.

Despite the prog’s worst fears, I think that Trump will view his power as part of a Constitutional framework and will allow the legislature to do what they are supposed to do.

– All of the symbolic climate change/global warming and cooling agreements (Copenhagen Agreement and Paris Agreement) will be repudiated on President Trump’s first day in office because they were never submitted to the Senate for ratification. The same is true with the Iran Nuke Deal, which was never submitted to the Senate. Expect sanctions on Iran for violating the agreement and for being bad actors.

– I expect some sort of Yalta-style turf deal with the Russians, but I’m not sure what form it will take and what it will include. It will be crafted as “spheres of influence” and “spheres of common concern” such as Syria.

– The Trans-Pacific Partnership Trade Deal is one in which Asian and Pacific nations joined together to stand against China, but it doesn’t do anything to help the US either. The situation between the US and China is fluid. It remains to be seen how that works out. But the TPP is finished.

– Sanctuary Cities will face sanctions. I don’t know how else that problem will be solved.

Chicago is pledging to remain a sanctuary city for undocumented immigrants, an act of defiance in the face of Donald Trump’s past promise to cut off those cities from federal funding. In sanctuary cities, local law enforcement officials aren’t required to alert U.S. Immigration and Customs authorities about the immigration status of individuals with whom they come in contact.

I am not sure what mechanism that President Trump will take to cut them off. Hopefully the House of Representatives can do it through cutting off appropriations rather than using an executive order. Meanwhile, all of the illegal aliens with felony convictions are likely to flee there and hide which will do nothing to reduce the crime rate there (or the other progressive cities where crime is rampant).