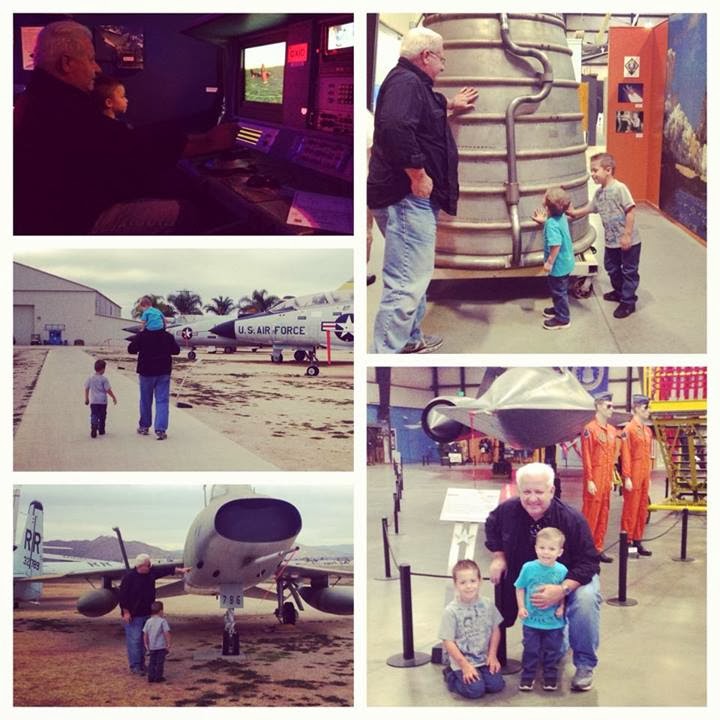 My oldest daughter has two boys and I took the three of them to the March Air Force Base Museum. It’s important that they get a sense of history from those of us who have lived through some of it and can put a personal twist on it.
Upper left – I sit at the flight simulator with 2.5 year old Cannon and we fly the aircraft through digital space. He loves airplanes and liked the simulator room best of all.
Middle Left – The Flight Line. There is an F-102 Delta Dagger, flown by President George W. Bush.
Lower Left – One of my favorite jets, the F-100 Super Saber. The Hun had 4 20 mm cannons and while it was a fuel hog, it was one heck of a jet. The pre-fly-by-wire combat aircraft appeal to me. The Hun was a single seat rocket and chewed up a lot of North Vietnamese turf.
Upper Right – The nozzle of a Space Shuttle. We’re all touching something that had been to space and returned.
Lower Right – We’re in front of an SR-71 Blackbird. It would have been cooler if it was an A-12 Oxcart (combat version of the venerated design), but as it, the experience was very good for the boys.