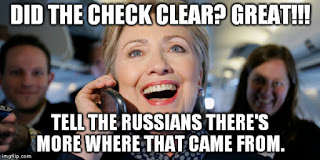 You know that the Democrats and the Clintons in particular went to great lengths to hide their blood-smudged finger prints where the Trump Dossier was concerned.
There’s a historical problem with most conspiracies and that is that they don’t remain hidden for nearly as long as the conspirators would like. There was a lot of mishmash about the Kennedy Assassination and who shot. I think that Oswald was the only shooter – and we’ll see what the classified information shows soon when it’s all made public. 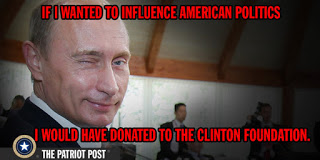 Hillary Clinton did a good job dumping Vince Foster in the park, but the fact that no bullet was found from the ‘suicide’ was bush league. Likewise with the Seth Rich murder. Nobody believes “the story” except the corrupt, lying, smug, evil, elite mainstream media. And in the case of the Washington Post, they’re breaking the story about the Clinton collusion with the Russians and the uranium-for-cash deal along with pay-offs to the Clintons.
I’d like to have been a fly on the wall when WAPO stabbed Hillary/Slick Willie in the back with that story.

American politics have NEVER been clean. However, the rampant corruption, covered up during the years of Obamanation (often by the shady FBI) seems to have eclipsed Watergate as a petty amateur hour.
Let me get this straight, the Clintons and DNC pay $6 million to fabricate a “Trump Dossier” and then the Obama White House and the DOJ/FBI use the faked document to justify wiretaps of the Trump Presidential campaign. Is that about it?
ANALYSIS – Whoever the Clintons hired as a fixer was a minor league actor. Likely a former CIA senior manager/bureaucrat. I could suggest a few names of incompetent desk-riders who orbited with the Clintons who would have done it. They needed a world series quality operation and in the world of toppling governments and fixing things, $6 million is CHICKEN FEED. I’m aware of a flight that former President Clinton made to a Latin American country and an intervention that ended up in a drug lord being released and the Clinton end was $20 million. You never read about that one in the papers. My analysis is that the Clintons were cheap…and they got what they paid for.

Will the Bitch of Benghazi finally get what’s coming to her? Will Slick Willie spend the rest of his life in prison. Keep eating that popcorn, stay tuned, but don’t hold your breath.